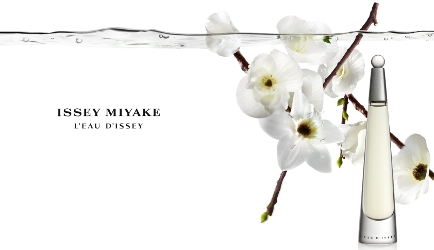 Last week I reviewed Room 1015's Power Ballad, a fragrance inspired by memories of teenage love and rock clubs in the 1990s. I didn't think it succeeded as an evocation of that decade, and many of you agreed with me. Ironically, although you (we) might have been listening to grunge or wearing Doc Martens and oversized flannel shirts in those days, there's a good chance you were wearing a clean- and fresh-smelling fragrance. It might have been a body spray picked up at Bath & Body Works, or it might have been a splurge from a department store. (I personally went through several bottles of Kenzo Parfum d'Été.) It might have been Issey Miyake L'Eau d'Issey.

In 1992, Issey Miyake was already known for his sculptural-minimal designs, which reinterpreted traditional Japanese techniques of fabric-wrapping and origami in state-of-the-art synthetics and other unexpected materials. For his first fragrance, he collaborated with the perfumer Jacques Cavallier. Miyake reportedly said, "Surely the scent of a woman who's splashing water on her clean body is the most beautiful fragrance in the world,"1 and this directive resulted in one of the era's most successful aquatic-ozonic scents. The new aromachemical Calone had been starting to appear in fragrances like 1991's Calvin Klein Escape, but it really took on a starring role in L'Eau d'Issey.

L'Eau d'Issey (the name is also a play on "odyssey") includes notes of lotus, freesia, cyclamen, rose, peonies, carnation, lilies, woods, osmanthus, tuberose, amberseed and musk. Cavallier described his finished product as "the scent of the spray rising from a waterfall, mingling with the perfume of flowers, and the fragrance of woods in springtime,"2 and that still sounds pretty accurate. L'Eau d'Issey's "waterfall" feels unisex and freshly showered, with Calone's signature melon aspect giving it a distinct personality. After all, what does water smell like? (That sounds like a kōan.)

Just when I start to think that L'Eau d'Issey's watermelon breeze and I don't get along, the fragrance's heart blooms in translucent white floral notes, especially some very clean freesia and a lily with just a hint of saltiness. There's a sharp, stemmy green note running throughout, and the base is a mix of sheer, well-scrubbed wood (almost cedar-ish) and musk. Despite all its "light" and "fresh" notes, L'Eau d'Issey is surprisingly tenacious on skin. At the end of a full workday, I could smell it on my wrists. It had come full circle to its dewy melon-rind introduction again.

L'Eau d'Issey's packaging, an icon in its own right, is a perfect fit for the aroma inside. A slender, frosted glass cone topped with a drop of silver, it was made to transmit a very clear message: the fragrance inside is nothing like Giorgio and Poison and other perfume powerhouses of the 1980s. In 1992, L'Eau d'Issey certainly felt like a breath of fresh air or, more accurately, a splash of cool water. If you're a fan of more recent clean-and-crisp fragrances like Maison Francis Kurkdjian Aqua Universalis or you're just looking for something fresh but more sophisticated than the whole CLEAN line, you may want to revisit this enduring 1990s classic. (Docs, baggy jeans, and matte brown lipstick are purely optional.)