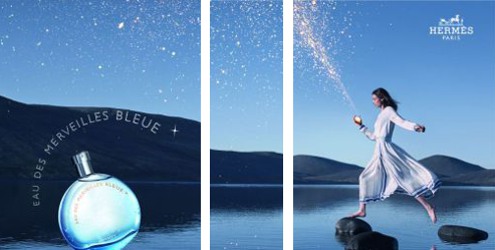 It would appear that Hermès is doing a flanker to 2004's Eau des Merveilles every so often, but waiting at least two years, sometimes more, between iterations. In addition to the original, we've now got Elixir des Merveilles (candied orange peel + vanilla biscuit) from 2006, Eau Claire des Merveilles (citrus soda + cosmetic powder) from 2010, and L'Ambre des Merveilles (amber + more amber) from 2012. Eau des Merveilles Bleue is the latest, and the first from house perfumer Christine Nagel. I was only middling excited about it, because it's blue. I like the color, but in fragrance, blue implies a particular smell-meaning, and in this case the description followed the color-coding: "the magic of the ocean and the colour of the sky", plus "washed in sea spray" and "the taste of water on pebbles". That sounds suspiciously like many other blue fresh, sporty, aquatic / ozonic fragrances, which are not generally my cup of tea.

And so it turns out. Eau des Merveilles Bleue takes the original Merveilles' riff on salty-sweet ambergris, and adds what I would call a "salty sea air" note. It's indeed fresh, rather sporty, and has considerably more sillage (and somewhat more lasting power) than the others in this series. It has an aquatic aspect, but it's more air than sea, and there is thankfully no melon. The dry down is recognizably Merveilles, but much cleaner — and Merveilles was not exactly skanky to begin with. The patchouli is lighter and cleaner, the musk is whiter, and there's an intensified mineral/stone/sand note along with some dry woods. The citrus and peppery notes from the original are still there, but they're less assertive under all the freshness, and what I called the "salt-drying-on-the-skin quality" now smells like salt drying on skin right after it was washed with Tide.

It's not exactly masculine — a woman could easily wear it — but it shares its fresh sporty elements with so many popular men's fragrances that it reads as masculine to me anyway.

Verdict: A big old meh. Mind you, it's well done, in fact I'd call it very well done. If someone told me they just had to have a clean sporty fragrance, Eau des Merveilles Bleue would be on my short list of suggestions. But I found it ever so slightly irritating to wear, and even more so worn next to any of the others in the series.

If you like fresh notes more than I do, do give it a shot. I would not be in the least surprised if it turned out to be the best-selling of the bunch.

If you like the idea but want your freshness toned down a notch, you might try Andrée Putman Préparation Parfumée, although I do not know if it has been reformulated since I last smelled it. 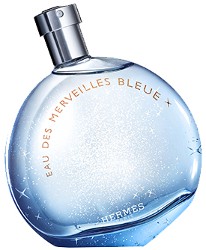