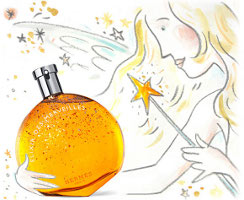 I was rather taken aback when I saw the list of notes for Elixir des Merveilles. Folding Eau des Merveilles into a sugary dessert doesn't strike me as an obvious choice, and the whole thing sounded so over-the-top foody, especially for Jean Claude Ellena.

The good news: it isn't really over-the-top foody. To be sure, it is sweet, especially in the top notes. The sparkling clear orange of Eau des Merveilles has been replaced with candied orange peel, lightly dusted with cocoa powder. Lightly is the operative word here — it did not, like Aquolina Chocolovers, send me dashing off to the pantry in a desperate search for chocolate. The milk is closer to that "cloud of milk" in Paul & Joe Blanc than to a creamy pudding, and the caramel is likewise subtle (think Frederic Malle Eau d'Hiver). It is still more transparent than dense, and isn't nearly as rich or warm as the Parfum des Merveilles. So, a bit of dessert, yes, but not massive overindulgence. 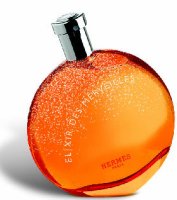 After around 20 minutes, the strains of the original Eau des Merveilles start to come through, and most of the dessert components recede, leaving only the comparatively austere vanilla biscuit and a tiny slice of orange. I do like the dry down, but still, Elixir des Merveilles doesn't have quite the same understated elegance of Eau des Merveilles, and while it is more obviously feminine, somehow it isn't as sexy. I would describe it as a "fun" perfume, very wearable, and well worth trying. I like it but don't love it, which leads me to...

The bad news: I bought Elixir des Merveilles unsniffed. As is often the case, I did so not because I was really dying to have it, but just because I was feeling stressed and so was dying to buy something, and it seemed like the most likely choice since Dzongkha isn't for sale yet. In my defense, I have hardly bought anything this year, so unless I go crazy between now and December I won't even begin to approach last year's rate of acquisition. But adding to my annoyance is that I've discovered this week that I do love Eau des Merveilles, so now I'm kicking myself for not buying it when it was available in that stunning constellation bottle. Drat.

Elixir des Merveilles is an Eau de Parfum, and the lasting power is good. It is available at Hermès boutiques now in 50 and 100 ml bottles, and should be more widely available at department stores soon.

Side note: as I discovered quite by accident this morning, Elixir des Merveilles layers quite nicely with Terre d'Hermès.