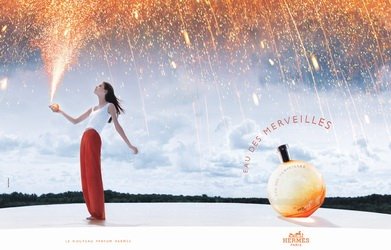 Hermès launched Eau des Merveilles in 2004. The fragrance was created by perfumers Ralf Schwieger and Nathalie Feisthauer, and has notes of elemi, bitter orange, Italian lemon, Indonesian pepper, pink pepper, ambergris accord, oak, cedar, vetiver, balsam of Peru and tears of Siam. Eau des Merveilles, or Water of Wonders, was said to have been inspired by ambergris:

"For me, ambergris is a magical material," said Givaudan's perfumer Ralf Schwieger...He explained that it reminds him of the biblical tale of Jonah and the whale, where the prophet was swallowed alive.

Fittingly, the finished product has a definite undertone of salty seawater, and without smelling in the least like Sel de Vetiver, has that same salt-drying-on-the-skin quality. The opening is peppery, with lots of sparkling orange, but the deeper amber and wood notes are present from the start and they remain as the orange slowly fizzles out.

Eau des Merveilles is an Eau de Toilette, and it has a soft, almost transparent presence. When it first came out, I tried it and thought it was just fine but not something I needed to own. Wearing it all this week has changed my mind: it has considerable personality despite the transparency, and it has a kind of understated elegance that is very much in keeping with the Hermès aura. There is something indefinably sexy about the dry down, and several times while wearing it this week I forgot what I had sprayed on and marvelled at how wonderful I smelled.

Sexy, yes, but feminine? I'm not so sure. Cosmetics International notes that "while many fragrances use wood and amber notes in their base, Eau Des Merveilles places an emphasis on these 'masculine' accents straightaway, without compromising its femininity." (2/1/2004) Well, it certainly doesn't smell at all too masculine for a woman to wear (although a quick perusal of the reviews at MakeupAlley indicate that at least some women disagree with me on that point) but there is nothing particularly feminine about it to my nose, and I'm rather surprised it isn't marketed as a unisex. Do comment if you disagree. 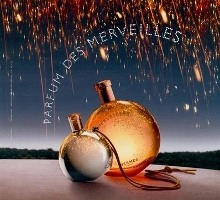 Parfum des Merveilles came out in 2005, and has notes of oak, patchouli, mosses, amber, balsam of Peru, tears of Siam, davana, cognac note, leaves and roots. As you would expect, Parfum des Merveilles is a denser, more concentrated fragrance. It retains the citrus but tones down the sparkle and amps up the woods and amber. There is more earthiness, and noticeably more patchouli. The cognac note gives it a late fall kind of feeling that is quite different from the summery trail of Eau des Merveilles. It is very much worth trying if you want a stronger version of the original, but I prefer the more subtle Eau des Merveilles.