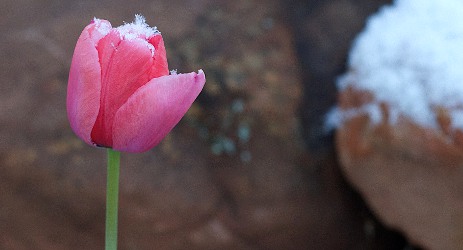 I am vocal about disliking spring. Where I live, there are always a few days in late February that feel like an elaborate set-up from Punk'd. Like newborn babes, they come: the office mates, friendly neighbors, the recently retired. They peer up into the warming blue and wonder aloud, trying to remember which way a hapless groundhog waddled weeks ago. Please don't take spring's bait. This year it snowed in April in the colder areas of Europe and North America and fans and news writers seemed to blame poor departed Prince. Let's face it, in Minneapolis anyway, it usually snows in April. And snow can be the least of our worries. I am a fan of heterogeneity — I like mixed drinks and mixed company, for example — but few phrases freeze the heart faster than that euphemism "mixed precipitation". Spring also brings wind, rain, seasonal allergies and skies the color of dead fish. Yes, the vernal months provoke a rare ire in me.

And yet, looking over my April 2011 Top 10 and Robin's post from last year on pretty spring florals, I've realized I have little cause to be so sour while wearing some of my favorite fragrances. Clutching roots and branches may grow from stony rubbish, as Eliot wrote, but I have hyacinth, lily-of-the-valley, magnolia, violets and iris to console me until mid-May. This time I've tried to avoid listing many of my more conventional blooming beloveds, to avoid repeating previous posts on the topic. So far, I have managed to completely miss the flood of new lilac releases — in addition to those Jessica caught and Kevin's La Parfumerie Moderne Désarmant, there has also been Ex Nihilo Sweet Morphine — and thus repetition was also dodged there, thanks to my laziness. Rest assured, though, like many of you, I could simply rotate three Guerlain standards all season long and make it through.1 Please comment with your own current sweetheart scents, usual suspects or no.

Gucci Envy: Well, this used to be a spring staple, but since the villains at Gucci discontinued it, I rarely hear it mentioned. When it launched in 1997, Envy played as an urban update on muguet, with its skyscraper bottle and (fifty?) shades-of-gray advertisements. (Tom Ford was then at the helm at Gucci.) Smelling it now, I am always struck by how fruity the opening is. For metro chic, that's a real wallop of pineapple! What follows is a beautiful but classical green floral, with the expected silvery song of lily-of-the-valley, though the flowers smell very blended and bright in the 90s manner. It's worth the trek to auction sites.

Charenton Macerations Asphalt Rainbow: Do you really want a stylized soliflore for the concrete jungle? Then I should point out this graffiti-inspired green rose. Accented with soapy musks and hissy aerosol notes, it's a fine bit of fun for those who are looking for amusement. If you have big city cash to blow, you might also enjoy Amouage Opus X, a vibrant, polarizing metallic rose meant to reference blood and varnish.

Bruno Fazzolari Jimmy: The Fazzolari line has a number of lovely, retro options for spring, including Au Delà and Seyrig, but Jimmy is the one I wear. The fragrance is a tribute to poet James Schuyler, who I don't know much about, unfortunately, other than his close connections to two of my favorite poets: he was a secretary to W.H. Auden as well as the friend, roommate and elegist of Frank O'Hara. Jimmy apparently loved violet perfumes and this is one, flower and leaf notes included, along with ylang ylang, cassis, rose attar, geranium, sandalwood, oakmoss and "daylight". It is very lemony and bright, with a slightly dusty floral heart that does smell like the windows and doors have just been thrown open for the start of spring cleaning. (Or at least what I imagine that process would smell like, not being much of a homemaker myself.)

Frédéric Malle Eau de Magnolia: As fresh and breezy as a dryer sheet commercial, this cologne was my favorite of the many magnolia perfumes of 2014. It reminds you what April showers are for.

Thierry Mugler Oriental Express: This powdery-woody iris perfume from Mugler's Exceptions collection carefully balances oriental warmth and gray-green floral cool. It's a bit subdued to conjure the romance of the Orient Express, in my opinion, but the appropriate elegance, mystery and expense are all there.

Issey Miyake a scent by issey miyake: Saddled with a bad pun for a name and overshadowed on release by Estée Lauder Private Collection Jasmine and White Moss, a scent by issey miyake limped into discount store oblivion rather quickly. (For me, that just meant getting a bottle on the cheap.) In both mentioned fragrances, the perfumers used synthetic white "mist" or "crystal" moss accords to take some of the weight out of a traditional chypre base. Many of the great green floral chypres of yore added an autumnal saturation and richness to their freshness, and taking this ballast out makes their sleeker modern counterparts more staticky and spring-like.

Estee Lauder Private Collection: Having invoked the sacred Lauder name and the harvest splendor of mossy woods, I will now recommend the crispest chypre in the EL line for April.

Michael Kors White Luminous Gold: This oriental seems a bit off-message for the Michael Kors brand, which usually sticks to deliberately bad mall fragrances. Yes, it is nearly too sweet, but instead of a shriek of fake white flowers over top, the amber in White Luminous Gold is off-set by an old-fashioned galbanum. Huh. Somehow it all turns out rather warm and relaxed, mature without being dowdy. Credit is due to perfumer Frank Voelkl, who seems to excel at making fragrances for the shoulder seasons.

Maison Francis Kurkdjian Pluriel Feminin: Pluriel is cheating, since Robin listed it as pretty last March, but it's too heart-breaking a posy to leave out. I also second Robin's recommendation of Carven Le Parfum as a cheaper, daintier Kurkdjian-crafted alternative.

More spring: do check out the lists at Bois de Jasmin :: Grain de Musc :: The Non-Blonde

1. That would be Après L'Ondée, Chant d'Arômes and Chamade, of course.

And even more spring...