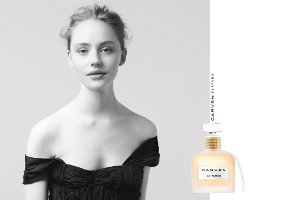 The venerable Carven brand has been undergoing a revamp over the past three or four years, and everything appears to be working out quite nicely, thank you:

When it was set up by diminutive tastemaker Carmen de Tomasso in the 1940s, its stock-in- trade was simple, couture for the rich and petite. By the 2000s, like many of its mid-century cohorts, it had made a ton of cash from perfume and somewhat lost its way, remaining a respected but not particularly relevant presence. But in 2012, thanks to the efforts of its new creative director Guillaume Henry, Carven is now, suddenly, one of the most talked-about new labels in the business.1

Perfume, of course, is part of the overall equation, as it frequently is in the world of fashion. Carven has recently relaunched their 1946 classic, Ma Griffe,2 and they've added Carven Le Parfum, a new fragrance for women (a cologne for men is due next year) developed under (also new) licensing arrangements with Groupe Jacques Bogart. Of course, things have changed since 1946, and Henry was adamant that the new scent not be "too heavy or complicated to wear" — hardly the hallmarks of Ma Griffe.3 But as we all must remind ourselves, sometimes several times a day, nobody ever made a bazillionty dollars catering to the prejudices of old-school perfumistas, right?

So, we have Le Parfum. It was developed by perfumer Francis Kurkdjian, and it's beautifully done: a white floral, ethereal rather than full-bodied, with a touch of green and an emphasis on the early spring sort of flowers (hyacinth, sweet pea) rather than the indolic hothouse sort that make floral perfumes hard for modern consumers to stomach (other notes for Le Parfum: mandarin blossom, ylang ylang, jasmine, osmanthus, apricot, patchouli and sandalwood). It's mostly clean, even a bit soapy, but it's not quite laundry detergent clean, and it's wrapped in a veil of sheer powder. It smells young and fresh and modern and charming — it's a perfect fit with model Brynja Jónbjarnardóttir4 — but sophisticated enough to suit the brand, and there is a nice suede-ish warmth, with the usual scrubbed-clean patchouli adding some depth and earthiness, to the dry down.

Verdict: It's lovely. It's not my cup of tea, somehow, but it's lovely, and very much worth sampling — and do try it on skin; on paper, it reads as much cleaner than it really is.5 I can't believe I'm saying this, but an 'intense' or 'noir' flanker might be a nice thing, and surely we'll get a flanker, no? Please, Mr. Henry, don't make it pink. 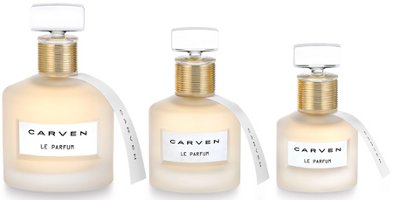 1. From Carven out a slice of the market at The Independent. Henry was appointed in 2009. And as Suzy Menkes has pointed out in the New York Times, "Mr. Henry has an advantage in that the Carven name can have no resonance with the young, sleek and chic generation he is aiming to attract."

2. I have not smelled the new Ma Griffe, and will probably give it a skip. If it's awful, please don't tell me.

4. If you missed the (likewise young and charming) commercials, they're here.

5. For modern "veil of sheer powder" scents that I do like, see the discussion in last year's review of Lolita Lempicka L’Eau en Blanc. But I wouldn't claim they're better done than Carven Le Parfum, necessarily.