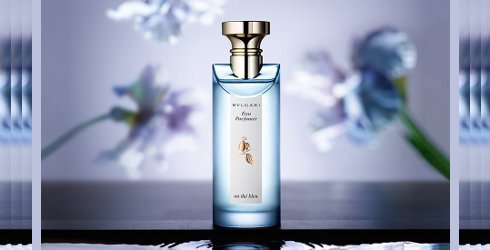 So Eau Parfumée au Thé Bleu not only smells like a variation on Thé Vert, but the citrus - fruit - tea opening briefly recalls another Jean-Claude Ellena scent, Osmanthe Yunnan from the Hermessence series. It stays in that territory for mere seconds before a mild (no claws!) but slightly bitter lavender mutes the impression, and Thé Bleu takes off in its own direction. The bitterness of the shiso and lavender, along with a vague strand of what smells like spiced dried grasses or hay, provide a contrast to the sweeter floral - tea - violet notes early on, and Thé Bleu maintains a lively, herbal aromatic character through the early stages of development.

The dry down is softer and calmer, with the whole now cushioned on bed of iris-y powder, clean-ish and a little vanillic. The final stages lose most of the tea, so it's now a quiet lavender - iris fragrance as much as anything else (it reminded me vaguely of Burberry Brit Rhythm; and for anyone who follows Andrier's work for Prada, it could likewise function as an Infusion de Lavande).

Verdict: It smells more like a meditation on tea plus "things that are/smell blue" than like a meditation on blue tea, but unless that's a crushing disappointment to you, it's very much worth a try. Thé Bleu isn't really a flanker, but it does exactly what a flanker ought to do: pays its respects to the original fragrance whilst updating it for modern trends. I found it wearable, likable and reasonably sophisticated, and the lasting power is good (far better than for Thé Vert). I don't adore it quite enough to put it on my buy list, but still, it's a shame they aren't doing smaller sizes, or better yet, a coffret with travel sizes of all four teas.1

Assam of India is in the recently launched Colognes Grand Crus collection from perfume house Berdoues. I wanted it immediately, partly for the notes (black Assam tea from India, citron and sandalwood) and partly for the bottle (see below), because, elephants. An incredibly kind reader found it on sale at a good price and sent me a bottle (perfume people are the nicest, right?) and lo and behold, the bottle is indeed fantastic (I've kept it sitting by my computer for weeks now, so I can admire the elephants) and the fragrance, while admittedly perhaps not the genius of all genius fragrances, is a very enjoyable summer-y black tea with citrus, sorta/kinda in the same ballpark as the black tea from Speziali Fiorentini or Jo Malone Assam & Grapefruit. Like those two, it is not an all-day affair, but it does better than you might expect, and it makes a decent no-brainer pick-me-up on hot days (especially if you leave it sitting by your computer, where you'll remember to use it).

If anyone has tried any of the others in the collection, do comment, and of course, feel free to comment on your favorite tea fragrance (or tea) regardless. 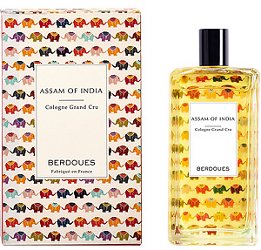 Berdoues Assam of India is $80 for 100 ml, and in the US can be found at Beautyhabit or Parfum1.

1. Note that I discovered there was a 40 ml size after writing that. Nobody seems to be selling it online at the moment, but according to the press materials, it does exist. 40 ml is not so bad, although I'd still love to see a coffret of travel sizes, maybe 15 ml?