Set alongside the Châteauneuf Orangery, the Perfumer’s Garden – “Le Jardin du Parfumeur” in French – was created with the support of patron Maison Francis Kurkdjian, and will bring together hundreds of flowering species: traditional plants (rose, jasmine), essences that exude unexpected aromas (chocolate, apple), odorous species, and “mute” or silent flowers, such as hyacinth, peony, and violet, which release no extract that can be used in perfumery, despite having a clearly identifiable smell. As a result, perfumers are forced to replicate their scents synthetically.

A labour of love crafted from the exceptional synergy between the Trianon gardeners and Francis Kurkdjian, this new garden will open its gates in Spring 2023. A number of tours and workshops will be rolled out for the general public, families, school groups, students, and associations.

— Read more in Creation of the Perfumer’s Garden at the Estate of Trianon, from the press office at Château de Versailles. 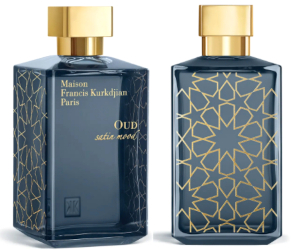 A possible lemming for fans of Maison Francis Kurkdjian Oud Satin Mood: "In this 350-piece limited edition, OUD satin mood eau de parfum wears a new attire, delicately hand-engraved in a Parisian workshop. Eight hours of work were necessary to craft two faces of each precious 200 ml bottle, with a golden pattern inspired from mashrabiyas. OUD satin mood brings to life a shimmering Orient, its bewitching floral and woody fragrance suspends time. This haute couture eau de parfum is like a precious fabric that delicately caresses the skin." $1250 for 200 ml at Neiman Marcus. 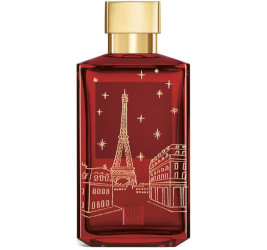 From Maison Francis Kurkdjian, Baccarat Rouge 540 in a spiffy holiday bottle (alas, with a price to match). "Each bottle requires eight hours of work to craft and is delicately hand-engraved in a Parisian workshop before being numbered, with only 300 in rotation. The legendary scent has established itself as one of the most iconic and influential creations of modern perfumery, composed of a distinctive wood accord exalted with enticing notes of fire, saffron, bitter almond and sensual animalic ambergris." 200 ml Extrait de Parfum, £830 at Harrods. 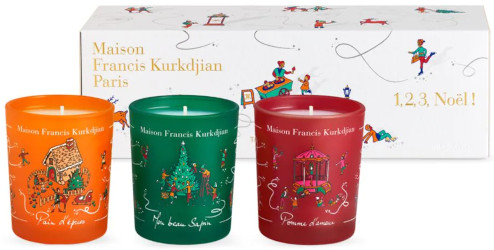 The 1, 2, 3 Noël! candle trio from Maison Francis Kurkdjian includes 75g candles in Pain d'épices ("a gourmand fragrance inspired by indulgent gingerbread"), Mon Beau Sapin ("Its woody and slightly resinous fragrance evokes the traditional Christmas tree") and Pomme d'amour ("inspired by a caramel-coated candy apple"). The set of three 75g candles is $115, or get the individual candles in 180g for $75 each. At Nordstrom, Saks or Neiman Marcus.