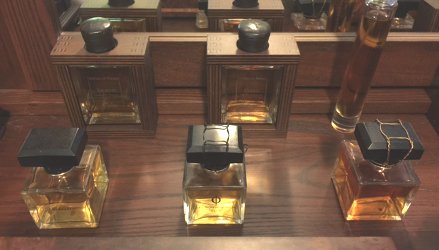 Like many Now Smell This readers, Tara grew up fascinated with perfume. It started with a bottle of Jean Naté splash in the bathroom, grew to appreciate her mother’s Nina Ricci L’Air du Temps and Jean Desprez Bal à Versailles, and proceeded in her early twenties to embrace classic whoppers including Giorgio, Christian Dior Poison, and Givenchy Ysatis before mellowing out. Unlike most of us, however, her collection now soars somewhere north of 700 bottles.1

Tara says that her perfume collection was a standard rotation of five or six bottles until 2005 when she discovered the Perfume of Life forum. That was the same year her husband started traveling to Europe for work. Tara began handing him shopping lists. (Once, Tara was home watching something about Serge Lutens on television. Her husband came into the room, pointed at Serge's image on the TV set, and said, “That’s the guy who waited on me in Paris.) 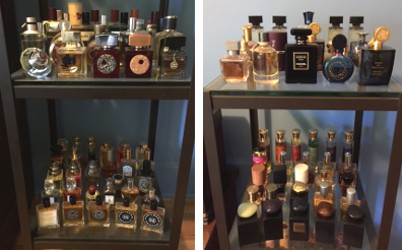 Initially, Tara acquired perfume in what she calls a “scatter shot approach,” buying blind based on reviews. Soon she learned she was drawn to incense, orientals, and rich florals. Two of her favorites are L’Artisan Parfumeur Dzongka (“comforting”) and Rundholz April 3, 1968 (“an animalic incense bomb”), although, in typical perfume lover fashion, she doesn’t want to be pinned down.

Tara and her husband live in Montreal (first 5 images shown) and San Diego (last 2 images), so some of her collection’s volume is due to having two homes. Particular lines of fragrances — her Amouages, Serge Lutens, and Guerlains — she keeps in both homes. For others, if she has similar fragrances—for instance Frédéric Malle Dries Van Noten and Byredo 1996 — she’ll split them between homes. For still other fragrances, she’ll simply take a decant to one home and leave the bottle at the other. Finally, she says some fragrances simply wear better in one city than the other. For instance, she likes Tauer Perfumes Rêverie au Jardin for San Diego and Le Labo Ylang 49 for Montreal. 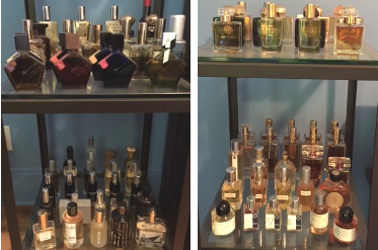 In Montreal, Tara stores her perfume on shelves. In San Diego, she stores the bottles in bamboo shirt boxes that are open in the front and slide like a drawer from their shelves so she can get to the bottles in the back (see final image).

Lately, Tara has slowed down her purchases and, for the most part, buys about a bottle a month. She’s become jaded about niche perfume houses and has stopped feeling compelled to sample from all of them, instead focusing on those she admires, such as Naomi Goodsir, Papillon Perfumery, and Tauer Perfumes. 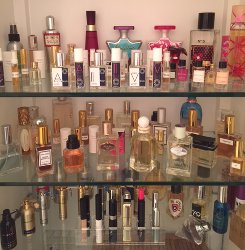 This year, her husband challenged her to wear all of her perfumes. Tara guesses she’ll have to wear two a day and keep track with a spreadsheet. It’s going to smell awfully nice in Montreal and San Diego in 2016. 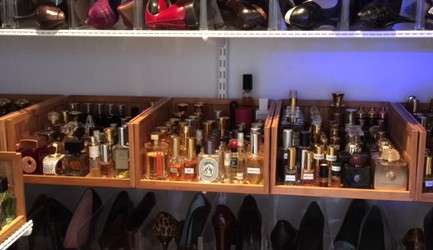 1. The next perfumista cabinet will feature a modest collection, I promise!