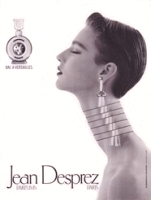 Surprise of surprises. When I first smelled Miller Harris L'Air de Rien, a fragrance named "air of nothing" and made for the breathy-voiced, hippie-chic Jane Birkin, the last thing I expected to think of was Jean Desprez Bal à Versailles, a scent purportedly made of over 300 ingredients and whose bottle features 17th-century ladies in pastel dresses. But from their shared sweet neroli beginning down to their saddle leather, musk, and dirty stable dry down, Bal à Versailles and L'Air de Rien smell to me like twins separated at birth and raised in different homes.

Bal à Versailles grew up in the family that had a maid to keep the vases full and polish the furniture with lemon oil and beeswax. The perfumer Jean Desprez launched Bal à Versailles in 1962, the same year that Guerlain released Chant d'Arômes (and that, incidentally, Jane Birkin turned 16 years old). Notes I've found listed for Bal à Versailles include jasmine, rose, sandalwood, patchouli, musk, amber, and civet. I also smell orange flower and leather.

In extrait, Bal à Versailles is rich with syrupy neroli that fades to a spicy blend of flowers before settling into a disturbing, yet comforting, smell of civet, old horse droppings, and leather. On me the Parfum is silky smooth, but it doesn't have much sillage and only lasts a few hours. In Eau de Toilette, Bal à Versailles sails through the bright citrus and goes straight for dry leather and processed hay, but if you pay attention you'll smell a bar of floral soap in the stable, too. The Eau de Toilette is more raw than the extrait, and of the two it smells most like L'Air de Rien.

The celebrity I associate most with the fragrance is Linda Evans, who played Krystal Carrington on Dynasty. (She's a far cry from Jane Birkin, I know.) In season one, Krystal proclaims that Bal à Versailles is her favorite perfume. In season two, Alexis lures Blake Carrington to Italy and tries to seduce him by wearing Krystal's favorite perfume. "I doused myself with Bal à Versailles," she moans as her advances are thwarted. 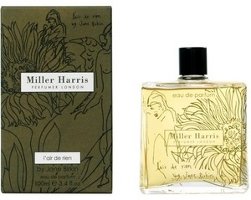 If Bal à Versailles grew up well to do, L'Air de Rien was reared in a more bohemian household. Lyn Harris created L'Air de Rien in 2006. The Miller Harris website says that Jane Birkin worked with Harris in the laboratory on the scent (their "love child born of the mutual admiration" they hold). This is how I imagine it: Birkin comes to the laboratory and sits on a stool with a dozen or so Birkin bags in various colors at her feet, and she talks about "her vibrant lifestyle" (macrobiotics), "her passions" (Serge Gainsbourg's prowess in the sack), and "her time spent in France" (more macrobiotics and Serge). Meanwhile, Harris darts around in what looks like a mad scientist's laboratory crammed with burbling beakers and tubes full of steam running here and there, and she dips a sample card in a beaker every few minutes for Birkin to smell. After a few hours and a bottle of Pouilly Fuissé, voilà, L'Air de Rien. Or maybe it didn't happen that way.

Osmoz lists L'Air de Rien's notes as French oak moss, Tunisian neroli, sweet musk, patchouli, amber, and vanilla. To this I'd add leather and dried horse droppings. As L'Air de Rien unfurls, its neroli top loses its citrus quality, but the sweetness remains so that when the fragrance dries down it feels like a layer of confectioner's sugar sprinkled in the barnyard without a lot of the middle notes many perfumes show. If Bal à Versailles is a bar of floral soap in the stable, then L'Air de Rien is a thickly frosted cupcake in an adjoining stall. L'Air de Rien is an Eau de Parfum, and a few spritzes last all day.

Side by side, Bal à Versailles and L'Air de Rien smell startlingly similar, and they're both dirty, warm, and easy to wear. However you like your stable — bourgeois or boho — one of the two is sure to appeal.