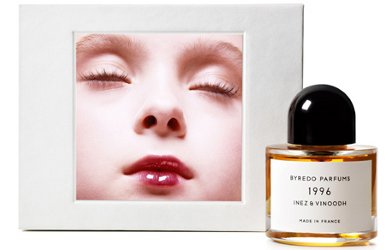 This fragrance was created with our home as a base, our lives, our travels, all the smells and scents we’ve sort of collected along the way…we always wanted our house to be some sort of warm wooden place where you can’t really tell if we started living there in the seventies or now.1 — Inez & Vinoodh

Byredo's 2013 fragrance launch 1996 Inez & Vinoodh came, like many recent niche scents, rather weighted with backstory. It was inspired by the disquieting photograph shown on the outer packaging, titled 'Kirsten, 1996' and taken by Dutch fashion photographers Inez Van Lamsweerde and Vinoodh Matadin, but inspired also by their lives and the notes they liked — it was originally intended as a holiday gift for their friends and came in a wooden box with the photograph under the lid.2 The fragrance itself is a warm woody oriental that's a must-try for iris fans — I would have included it in my Best of 2013 if I'd managed to smell it in time.

It starts crisp and bright; they did not stint on the juniper berry or the pepper. I was about to write that it could be a black pepper martini if such a thing existed, but of course black pepper martinis are a thing, what flavor hasn't been done in a martini by now? Add a twist of citrus peel, you've got the opening of Byredo 1996. Things warm up quickly, though, as the iris comes into focus and gets reasonably (or unreasonably, depending on how you feel about iris) root-y, and that's the basic trajectory for the duration: it gets warmer and darker and earthier the longer it's on skin. The early dry down is a middling-dark blend of iris, amber and soft leather, with just a touch of vanilla to keep it from being too bone-dry. The patchouli helps to darken things up but is very much of the modern, non-musty variety, and it's not heavy in any case.

Verdict: Byredo 1996 is beautifully done, and a perfect contender for a cold-weather iris. It does not, to me, evoke the photograph it was inspired by, and just as well — I'd really rather my fragrance not be so thought-provoking as all that. 1996 is quietly sexy, and could easily be worn by either sex. Oh, and the lasting power is excellent. Highly recommended.

2. You can read more about 1996's development at Into The Gloss, and you can read about the exhibit "The Widow" that included the photograph at Matthew Marks Gallery. You can see the scent's original packaging at Le Blog de Moon.