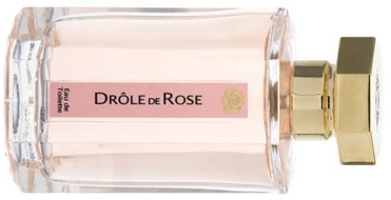 L'Artisan Parfumeur, like Serge Lutens, is a Paris-based niche fragrance house, and I would guess that if you were to rank niche perfume brands by the status accorded to them at the various online fragrance blogs and forums, Serge Lutens would easily take the top spot and L'Artisan would comfortably take the second (do comment if you think my estimation is way off base).

The two brands make an interesting study in contrasts, especially if you will allow for any number of sweeping generalizations (and if you won't, do please skip the rest of this post). Yesterday in my review of Sa Majesté la Rose, I said that the Serge Lutens fragrances can be characterized as...

...personal artistic statements; to smell them is akin to entering someone else's dream world. At the same time, as perfumes, they are satisfyingly rich and complex...

As with the classic perfumes of the first half of the 20th century, the Serge Lutens scents unfold slowly over the course of hours, and it is this complexity, I think, that allows for the intense, dream-like quality of the line. Yet the fragrances do not feel in the least old-fashioned, partly because of the unusual and exotic combinations of notes, but also because they simply smell outside of the whole canon of western perfumery. It is rare to hear someone compare a Serge Lutens fragrance to another scent (unless it is another from Serge Lutens), as is so commonly done with other fragrances on the market.

L'Artisan's approach is something altogether different. I would not characterize the brand's aesthetic as "satisfyingly rich and complex", if anything, the line smells modern precisely because it has discarded conventional ideas about structure and composition. L'Artisan tends towards transparency and light, and even the denser, heavier fragrances, like Voleur de Roses, seem like explorations of relatively simple ideas. I sometimes think of the line as a catalog of "little smells". If that sounds like a criticism, it is not meant as one in the least, it is a style that I happen to like, and L'Artisan is one of my favorite houses.

L'Artisan, like Serge Lutens, often uses unusual and exotic combinations of notes, but smell Bois Farine next to Chypre Rouge: it is just not the same approach to exoticism. And of course, the L'Artisan line doesn't present a unified kind of exoticism anyway, not being the outgrowth of the ideas of one man. But these aren't fragrances without stories. Passage d'Enfer illustrates beautifully that even a very simple fragrance can be extraordinarily evocative of place and time.

Both lines are firmly niche, at least to my mind. Neither specializes in blockbusters. The fragrances don't smell generic or like they've been through a series of focus groups (although perhaps they have, I wouldn't know), and they don't always bow to conventional gender distinctions, or even to conventional ideas about what "unisex" should smell like. This is what makes them stand apart from the mainstream, and is what I think of as the hallmark of niche perfumery.

L'Artisan Drôle de Rose is admittedly somewhat of an afterthought to all of the above, being no more representative of the L'Artisan line than any of the others. It was created by perfumer Olivia Giacobetti in 1996, and has notes of rose, aniseed, orange blossom, white iris, violet, almond, honey, rose powder, and leather.

Drôle de Rose is often compared to Frederic Malle's Lipstick Rose (2000), and the two share an attitude along with prominent notes of rose and violet. That attitude is rather hard to describe, but both scents combine a modern, overtly synthetic feel with an almost tongue in cheek, vintage uber-femininity: picture a woman with lots of hair piled up high on her head, wearing a negligee, and sitting at her dressing table holding a large powder puff. Now picture Olivia Giacobetti interpreting that woman into scent, and you have Drôle de Rose. It is a rose fragrance to be sure, but it has nothing whatsoever to do with Serge Lutens' Sa Majesté la Rose.

5 Perfumes for: a Lipstick Lover