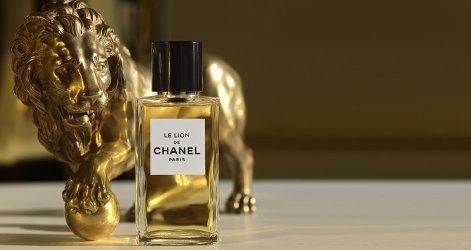 In my mind’s eye, it went down like this: “Amber? You want us to develop an Exclusif focused on amber?” I picture four or five people around an ebony table in a taupe-tinted room with black moldings — the board room version of a Chanel suit.

“You did it with patchouli,” the executive says. “No one smells Coromandel and thinks of Woodstock.”

“Not at that price,” the intern mutters.

“With Coromandel, we had a touchstone,” one of the fragrance team says. “Mademoiselle’s Coromandel panels. They represented what we were to create. Amber is so, so—”

“People like amber,” the executive replies sternly. “Our Exclusif line lacks one. Besides, we have a touchstone here, as well. Coco’s astrological sign was le lion. We will call the fragrance Le Lion de Chanel. Lions are amber-colored.”

“And loud,” the intern adds beneath her breath.

The executive stands and snaps his briefcase shut. “Run with it.”

Amber can be demanding. In doses high enough to nudge a perfume’s needle from “oriental” to “amber-focused,” amber can sit heavily enough to suffocate anything a perfumer might add to ease personality from the note. (If you doubt me, spend half an hour in a room with an amber candle. You’ll want to powerwash your nostrils.) For me, what works is amping amber’s connection to the sea with iodine-like saffron, or with notes reminiscent of salt and sand as in Hermès Eau des Merveilles. Or, go all in and give the amber a strong friend, like sandalwood, as in Serge Lutens Ambre Sultan.

Chanel chose to balance amber’s “grabby” side with a generous dose of lemon. Le Lion’s lemon is more than a quick citrus opening — it is amber’s equal partner at least halfway through the fragrance’s duration on my skin. As the lemon settles, amber turns it sepia-gold. Labdanum complements the amber but gives it some breathing room. Especially in the beginning, the amber smells leathery, and I understand how it might evoke both big cats and Leos.

Le Lion has generous sillage and lasts from breakfast through dinner, no problem. And the amber never dies. Sometimes it’s sharper than others, and sometimes it seems to relax into a sort of amber-tea, but it persists. A non-animalic musk cushions the amber as it fades.

Although the lemon-amber pairing works, and, as a plus, gives the fragrance an androgynous feel, it runs Le Lion into a big fat problem. This problem’s name is Shalimar. Guerlain Shalimar owns the lemon-amber pairing. Sure, Le Lion is more spare and presents a flush of musk in its dry down, but old lady Shalimar with her floral bosom and hint of civet makes Le Lion look like an Ikea bookshelf in an 18th-century chateau library.

Worn side by side, after the lemon has faded, the two fragrances are still clearly kin. Shalimar shows its baroque side with a touch of vanilla, and Le Lion’s more contemporary musk steps up, but the DNA between the two is irrefutable.

Would I wear Le Lion if a bottle appeared on my dresser? Of course I would. But, given my budget, for a lemon-amber hit, I’d stick with Shalimar, Carthusia Ligea La Sirena, or even Etro Shaal Nur, if I could get my hands on a bottle.