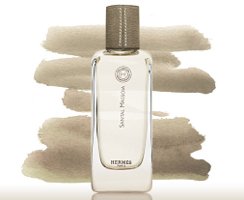 Santal Massoïa is the tenth fragrance in the Hermessence Collection from Hermès, and like the others, was developed by house perfumer Jean-Claude Ellena. Unless you're new to the collection, you probably already have some idea of what to expect, that is, you know not to expect Santal Massoïa to fit neatly into your idea of a sandalwood (or massoia) fragrance, and you know that this isn't the place to go looking for the functional perfume to last through your 8 hour workday. I've already gone on and on about my take on the collection, and if you've been reading here regularly you also know that there's about a 50-50 chance that I'll want at least a small bottle of Santal Massoïa, and I've said it before but I'll say it again: thank you, Hermès, a million times over, for the lovely little 15 ml bottles.

And I'll save you time and start with the outcome: yes, it's 15-ml-bottle-worthy, no, it isn't going to join Osmanthe Yunnan and Vetiver Tonka in the 100-ml-bottle-worthy category. Given the size of my overall perfume collection, the 100-ml-bottle-worthy category, mind you, is now very narrow indeed, but another way of putting it is that I really like Santal Massoïa but I'm not head-over-heels swooning, although once upon a time I might have said the same of Brin de Reglisse and now I'm in the position of having to replace what I had of it. So sometimes only time will tell.

Santal Massoïa is really awfully close to what Jean-Claude Ellena said it was, so I'll repeat that here:

«There are linear, vertical woods like cedar, and others that are horizontal, round, supple and velvet-smooth, such as sandalwood and massoia. With this understanding in mind, I composed this enigmatic, inviting yet distant perfume of milky woods, with its unusual, pungent hints of resin and dried fruit, and familiar smells of dulce de leche and flowers.» Jean-Claude Ellena

So yes, we have a very soft and sheer milky woods. As with Vanille Galante, it's liberally sweetened, but also as with Vanille Galante, it's sheer enough that it the sweetness doesn't read as overwhelming. It's fruity and crisp in the beginning, and then lightly green and lightly figgy, then as it dries down further the woods take on a toasted-with-vanilla-sugar aspect, but again, it's all 'distant', just as promised. Several others have noted that the dry down has something vaguely in common with the nutty-doughy finish to L'Artisan Parfumeur Bois Farine, and I would never have thought of it but yes, it does, vaguely, albeit without the heavy cedar pencil note that make Bois Farine hard for some people to wear.

If it were slightly heavier and creamier, it would probably qualify as a comfort scent, but it's really too airy to qualify as such. I did not love it the first time I smelled it, but I've liked it more and more on subsequent wearings. If you've smelled it, do comment, and if you haven't, do chime in anyway and tell us your favorite Hermessence. 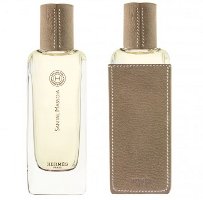