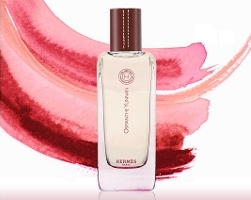 Osmanthe Yunnan is the fifth and most recent of the Hermessence series, which debuted in 2004 with four fragrances: Vetiver Tonka, Ambre Narguile, Rose Ikebana, and Poivre Samarcande. Like the others, it was created by Hermès house nose Jean Claude Ellena and is available exclusively in Hermès boutiques. The perfume notes are tea, orange, freesia, osmanthus and apricot.

Osmanthe Yunnan opens with sharp, dry citrus; as noted in the comments last week, it is somewhat reminiscent of another Jean Claude Ellena fragrance, Divine Bergamote by The Different Company. As it dries down, Osmanthe Yunnan veers off in another direction, starting with the lightly smoky scent of dried black tea leaves and gradually allowing more of the osmanthus to shine through. The whole stays very muted and soft and pale. It is summery without being bright, and fruity without much sweetness: rather than a juicy bite of ripe apricot, there is a more subdued aroma, something akin to the leathery skin of a dried apricot.

Jean Claude Ellena is known for his minimalist approach to perfume, and it is in full swing here. Osmanthe Yunnan probably vies with Poivre Samarcande as the most pared down of the Hermessences. It is also the least foody of the bunch. It is a lovely scent, but not one that makes a huge statement, and in that sense it is perhaps less interesting than Vetiver Tonka or Ambre Narguile. I have no idea what fabric it is supposed to evoke (Vetiver Tonka was to be wool, Rose Ikebana silk, etc) but I would choose a light summer gauze.

All of that is not to say that I don't love it — I do. It is worth repeating a quote that I cited in my review of Poivre Samarcande:

"These are not light fragrances," explains Ellena. "But they're not these 'big stories,' like some complex fragrances can be. Instead, I think of them as little haiku." (via W Magazine, September 1 2004)

Osmanthe Yunnan reminds me of another little haiku of a tea fragrance, Thé Pour Un Été by L'Artisan. They smell nothing alike, really, but share the same "add nothing that isn't needed" approach. It is easy to imagine that with a modicum of training in perfumery, you could do as well or better yourself, and it is only after trying hundreds and hundreds of fragrances that it becomes obvious how rare it is to find something that is really simple but still worth the wearing.

The packaging is lovely: the bottles have a nice heft, the caps are done up in stitched leather, and each of the Hermessences is given a different hue by a layer of color which reflects upward from the bottom of the bottle. The bottles come in a muslin drawstring bag nestled inside the signature orange and brown Hermes packaging, all tied with a brown ribbon.

The 100 ml bottle of Hermès Osmanthe Yunnan Eau de Toilette is $180. Ouch. Would I have bought it if I had smelled the fragrance first? Absolutely. But it is a shame that I didn't have the patience to wait for the Discovery Set, which until the release of Osmanthe Yunnan consisted of four 15 ml bottles for around $125 — not as economical per ounce, but perfect if you don't need quite so much juice and can find others to split the set with you. I don't need 100 ml of anything, myself.

Victoria will have a review of Osmanthe Yunnan today on Bois de Jasmin.