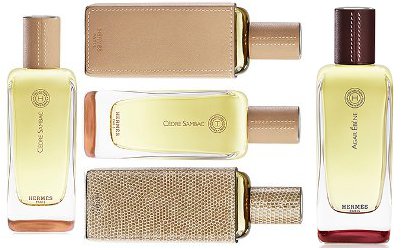 Of the five new Hermessence fragrances, I've already reviewed Myrrhe Églantine. Today, short reviews of the other two fragrances in Eau de Toilette, Cèdre Sambac and Agar Ebène. If you've smelled either of the two "perfume essences", Musc Pallida and Cardamusc, do comment, as I may or may not ever get around to them and it's a pretty good bet that I'll never buy them.

Upon this age-old tree, strong and graceful, I wanted to grow an embracing jasmine that coils around it. — Christine Nagel

I wanted a nice jasmine soliflore from Hermès for ages, not that I'd any reason to expect such a thing: it would not be their style. So instead, I got first the little spray of jasmine water that is Le Jardin de Monsieur Li, and which I do adore even if it is not hardly what I had in mind, and now, Cèdre Sambac, which again is not the perfume I was envisioning, and is not any sort of jasmine soliflore anyway.

Cèdre Sambac is a bit of a departure for the Hermessence line. I don't think your average consumer would smell Myrrhe Églantine and immediately suspect a changing of the guard at Hermès; Cèdre Sambac is the announcement, perhaps, that perfumer Christine Nagel has her own plans for the range. It's dense and warm (early on at least), not so easy to wear, and it's frustratingly changeable on my skin. At least once I wore it and had lovely whiffs of jasmine all day (well, all morning anyway), but more often, the cedar predominates, or perhaps I should say that at times, the two elements seem so entirely intertwined (or so altered molecularly) that they become a new smell. It's slightly dirty / animalic, in a way that is hard to pin down: at times almost leather-y, at times almost cumin-y. The jasmine sometimes seems lush, sometimes airy, and while it doesn't immediately strike me as indolic in the traditional sense, at times I get a distinct undertone of mothballs.

It's entirely unisex to my nose, although as is often the case with such fragrances, I'm guessing some men will find it too floral and some women will find it too woody. I thought the denseness might signal greater lasting power than some of the other Hermessences, but nope, not really. Myrrhe Églantine does a better job on that score.

Verdict: Cèdre Sambac was not love at first sniff. It's arguably the most unusual of the bunch, though. I'm impressed, and I'll certainly spend more time with it.

To the scent of agar wood, which carries a warm and mysterious vibration at its heart, I wanted to bring another wood, fir balsam, with its balmy and enveloping notes. — Christine Nagel

In case you thought Hermès would never do oud, here is their entry, although Nagel clarified for Madame Figaro that they were not jumping on the trend, and that Agar Ebène uses uninfected wood1 instead of the traditional oud (which as she notes, is rarely in perfumes that claim to feature it anyway).2 Whatevs, and for our purposes, it matters little. Agar Ebène is a polished, highly wearable, almost silky rendition of wood, dark-ish but not at all dense. It has a little trill of tartness in the opening, the teensiest little edge of pine-y smoke in the center, and a cloud-of-velvet finish.

Verdict: Yum. If, like me, you are too cheap to buy the Musc Pallida and Cardamusc oils, you may be glad to hear that you can still play — Agar Ebène layers nicely with Myrrhe Églantine, although as the Myrrhe is the denser and longer-lasting scent, you'll have to be careful with the proportions. Meanwhile, Agar Ebène also smells perfectly elegant on its own.

Overall: Fans of the Hermessences should be pleased by this new set. I am still hoping against hope that Jean-Claude Ellena will follow Pierre Bourdon and Alberto Morillas (among many others) and start his own fragrance line, but meantime, it's comforting to know I can still find things to buy at Hermès. I would guess that I'll drain my bottle of the charming crowd-pleaser, Myrrhe Églantine, first, but Agar Ebène will be a close second. I shall have to see if Cèdre Sambac grows on me, or if it remains the admired-but-misunderstood genius of the set.

Hermès Cèdre Sambac and Agar Ebène are still not on the US Hermès country site (although they are on the Canadian site). In the UK, they are £180 for 100 ml and £277 for 200 ml Eau de Toilette. I assume they will both eventually be available in the gift sets (four 15 ml bottles) but at the moment, of the new scents, only Agar Ebène and Myrrhe Églantine are currently listed as options. (Musc Pallida and Cardamusc are £275 each for 20 ml, which the website helpfully points out is £1,375 per 100 ml.)

1. I am not an expert, but from what I have read, uninfected Aquilaria wood has almost no odor and would not be called "agarwood" in any case; the term "agarwood" is usually used as synonymous with oud, that is, it is the resin from the Aquilaria tree after it has been infected with the Phialophora Parasitica fungus. But all of that is splitting hairs, since you never know what is in any perfume, and at this point everybody knows that most "oud" perfumes don't have any real "oud".