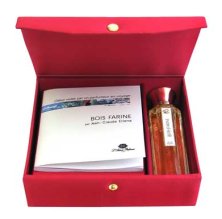 Earlier this fall, on the advice of a friend, I gave L'Artisan Timbuktu another try. I did not care for the fragrance when it was first released, but was considerably more taken with it the second time around. At the time I mentioned that I would buy it in a flash in a 15 ml bottle, and lo and behold, along comes the new L'Artisan coffret set with 15 ml bottles of Timbuktu and Ambre Extreme. It was no hard thing to find a taker for the Ambre, so there went my resolution to cease buying perfume for the rest of 2005. Ah well!

What does that have to do with Bois Farine? Well, very little, except that Bois Farine was the first in the travel-inspired series of fragrances that included Timbuktu, and as with the Timbuktu, I did not much care for it when it was first released. I've been meaning to revisit it since it has come up in the comments several times as of late, and Victoria reviewed it recently on Bois de Jasmin.

Bois Farine was launched in 2003. It was created by perfumer Jean Claude Ellena, and according to L'Artisan...

...is the product of his encounter with a magic tree in the Reunion Islands.

Here, in a forest known as the coloured wood forest, surrounded by evocatively named trees, red wood, yellow wood, iron wood and milk wood, he unexpectedly discovered the fragrant white tree - a rare and nowadays protected species, reputed to have magical powers. This tree is specific to Reunion Island and its red flower smells like flour.

The top notes of Bois Farine are frequently compared to peanut butter, and there is a definite nutty undertone mingling with the fennel seed and the floury notes. The iris is pronounced in the dry down, as is the cedar, but I don't notice them as distinct aromas; the overall effect is of uncooked pastry dough sprinkled with sugar and toasted almond slivers. Plus lots and lots of wood. The sandalwood and gaiac wood intensify as it warms on the skin, eventually mellowing the sharpness of the cedar and tempering the sweet foody notes.

I distinctly remember being put off by the heavy cedar when I first tried Bois Farine — my testing notes say "pencil shavings" — but as these things go, 400 fragrances later, pencil shavings have come to smell awfully good to me and the cedar does not seem at all overdone. Bois Farine is a rather odd fragrance, but also simply gorgeous, and another must-have.

So, L'Artisan, do release Bois Farine in a 15 ml and I promise to buy it immediately. And while we're on the subject, I would love to see another release in this "travels of the perfumer" series. It is much more interesting to me than the new limited harvest scent, Fleur d'Oranger, which is quite lovely but also quite outside of my price range.

L'Artisan Parfumeur Bois Farine is an Eau de Toilette. For buying information, see the listing for L'Artisan under Perfume Houses.

Note: the picture shows a coffret set with a 50 ml bottle of fragrance and a booklet of watercolors by Jean Claude Ellena.