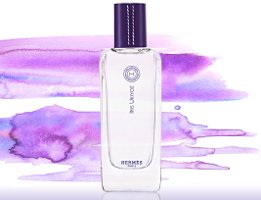 Regular readers know I look forward to anything new from perfumer Jean-Claude Ellena at Hermès. I have called myself a fan girl in the past, but now feel compelled to point out that I just really like his perfumes; I don't think he's a rock star and I do not have a poster with his face on my wall. Ok? But in all truth, a rather large portion of my fragrance spending ends up in the (surely already brimming) coffers at Hermès. Many of us like to think that brand doesn't really matter — it's the juice that counts — but it's hard to completely ignore brand influence even if you try. In this case, it helps that I like Hermès despite the fact that nearly nothing on earth interests me less than spendy handbags and silk scarves. I like Hermès because they consistently put out a respectable, well-made product. The fragrances are interesting and wearable, the packaging is generally worthy and sometimes it's spectacular (Voyage d'Hermès), and their advertising doesn't make me cringe. They don't alternate high-end vanity projects with cynical, focus-grouped garbage designed to capture the lucrative 'tween-to-teen market. To my mind, Hermès is the last great hope in the mainstream prestige fragrance market: let's just hope Louis Vuitton Moët Hennessy stays far, far away.

That is not to say I like everything Jean-Claude Ellena cooks up over there. Of the Hermessences, the exclusive (and expensive) perfume range at Hermès, I own five out of the nine, and thanks to the fact that it's possible to find them in comparatively affordable 15 ml bottles, I own all of them that I want to own.1 The latest of the nine, Iris Ukiyoé, is not going to join my collection.

Iris Ukiyoé, in case you haven't been following the news, takes its name from the Japanese art of woodblock printing (see ukiyo-e at Wikipedia) and is meant to focus on the iris flower, not the iris root that is commonly used in perfumery. It's not the first perfume to do so — among others, there was Bvlgari Omnia Amethyste and the Eau de Toilette version of Prada's Infusion d'Iris — but it's not what you usually expect when iris is in the perfume name. Anyway, Iris Ukiyoé is a floral, and if you've been reading the reviews you already know it has something in common with the last Hermessence, Vanille Galante: it's watery-dewy and fresh, and lightly green, and if it has a season, it would surely be spring. I don't know the smell of scented iris (none of the irises I grow have much fragrance) and Iris Ukiyoé isn't meant as an exercise in verisimilitude anyway, so the best I can tell you is that it smells slightly fruity, mildly spicy, a bit rose-y (rose and orange blossom are both listed in the notes).2 Just about every review I've seen so far has called it cold, and it is, especially in the early stages which are dominated by sparkling grapefruit.

The later stages are pale and woody, and just when I thought the green had faded away, it returned in the form of almost-bitter crushed stems. A touch of sweat in the grapefruit early on, plus those bitter green notes at the end, are all that keeps it from being as delicate (or girly) as Rose Ikebana.

Why don't I love it? I don't know. I loved Vanille Galante as soon as I smelled it, and for that matter, I love Rose Ikebana. Iris Ukiyoé just didn't excite me. It's pretty, and it did not leave me absolutely cold — so far, the only Hermessence to accomplish that was Paprika Brasil — but nor did it scream "buy me". So there you are. If you've tried it, do comment and tell us what you thought. Whether you've tried it or not, tell us what brand you think is the last great hope in the mainstream prestige fragrance market.

Hermès Iris Ukiyoé is available in 100 ml Eau de Toilette for $235. I assume it will eventually be added to what is now called the Gift Set: four 15 ml bottles for $145. For buying information see the listing for Hermès under Perfume Houses.

1. In case anyone is curious, the five I own are Rose Ikebana, Vetiver Tonka, Osmanthe Yunnan, Brin de Reglisse and Vanille Galante.

2. But March over at Perfume Posse says it doesn't really smell like the scented irises she knows.