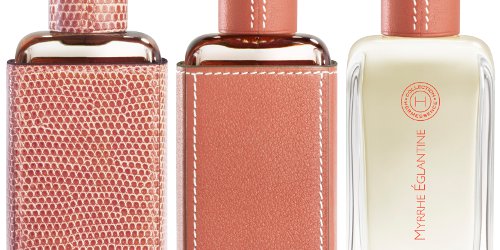 Myrrhe Églantine is one of the five new Hermessence fragrances from Hermès. They're the first additions to the series from house perfumer Christine Nagel, and before you go complaining about the five, don't forget that the Hermessences debuted under Jean-Claude Ellena — way back in 2004, a kabillion perfumes ago! — with four: Ambre Narguile, Poivre Samarcande, Rose Ikebana, Vetiver Tonka. And, happily for me, I'm only going to worry about three of the new ones, since two are expensive perfume oils I'll probably never manage to get my hands on. As for Agar Ebène, Cèdre Sambac and Myrrhe Églantine, I bought those unsniffed right away, in the (swap-bait) 15 ml travel sizes. I'm starting with Myrrhe Églantine, largely because I was curious what Nagel would do with it, given that there's already a rose in the series.

Hermès is a luxury house, and they do luxury press jaunts to match,1 but they're not known for providing the sort of persnickety details that perfumistas adore, like say, a list of notes. So what we know is basically the name, which references myrrh and rose. Here is what little more I can add, courtesy of Wallpaper magazine:

'Myrrh is a difficult material to work with and hardly ever used today, though it’s one of the oldest perfume ingredients,' Nagel says, and you can sense that she’s enjoyed the challenge of balancing her disparate ingredients to make a harmonious whole. The myrrh adds an extra note of resinous sweetness to the scent, extending the evanescent smell of this lightest of rose perfumes. (In practice, eglantine’s simple, five-petaled flowers yield no viable amounts of perfume oil, so Nagel has had to recreate its scent using a skilful blend of other ingredients.

Wallpaper also notes that the rose in question is the wild dog rose, rosa canina.

Ok then? If you want more background on what Nagel is up to with this set, do see Persolaise's review of Cardamusc. What I can tell you about Myrrhe Églantine is that it's quite different from Rose Ikebana, although I can see where a person who didn't care about roses, or didn't care so much about perfume, might find the distinctions relatively unimportant. It's quiet, as are most of the Hermessences, and it appears to have a little dash of citrus, softened by some rounder, fuller fruit. So, soft, nothing like the slap of sparkling grapefruit and tart rhubarb in Rose Ikebana — not that Rose Ikebana ever goes much above a whisper, either, and for that matter there's a bit of a tart thread through the opening of Myrrhe Églantine.

Thirty minutes in, I'm realizing that I never noticed just how peppery/spicy Rose Ikebana is; the Myrrhe Églantine has its own (soft!) little kick of spice but next to Ikebana it feels comparatively calm, just a lovely little fresh rose on a pale, warm, sweetish but not too sweet, base. I don't think anybody will smell it and think ah, myrrh!, but you will notice that simultaneously dusty-earthy, sweet and resinous base if you apply generously and then press your nose right up to your skin. (It would probably help if I had the proper humid weather that might make it sing, but alas.)

Verdict: It's not my favorite Hermessence or even my favorite from this trio, but I'm charmed. In a million years I would never pay for a large bottle, even if I was still buying large bottles, and I'm not even sure I'd have bought it in 15 ml if I was buying a set after spending more time with the three. All the same, for the moment I'm quite happy with my little bottle. I think I'll keep it. 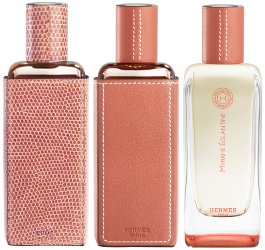 Myrrhe Églantine is not yet on any of the Hermès country sites that I can find. It is apparently for sale in Dubai, and possibly other places? Do comment if you know. I will update with prices when it appears in the US. It will probably be sold in the usual sizes, which are 100 and 200 ml Eau de Toilette with optional leather cases, or in gift sets with four 15 ml bottles.

1. If you never saw it, do pull up the video for the press launch of Eau de Rhubarbe Écarlate and Eau de Néroli Doré, and skip to about the 2:20 mark.