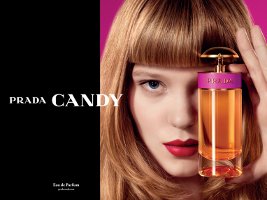 This scent is more feminine and more excessive than past launches. It has an explosion of joie de vivre that is quite unique for us, and uses a lot more color...

Up until now, we have explored the more traditional and classic side of Prada, but the brand is much more than that.1

Prada Candy incarnates the new Prada woman: she's daring, sensual, full of life and implosive. The perfume is named after this seductive and joyful girl who is running wild.

The first two statements about the new Prada Candy were made by representatives from Puig, the company that holds the fragrance license for Prada. The third is from the scent's description at Neiman Marcus, which has exclusive rights on the fragrance (for the US, anyway) until October. If a seductive and joyful girl running wild — and flashing her hot pink undies, no less — doesn't sound like the Prada that perfumistas know and love, hey, the times they are a-'changin, and you probably already guessed that from the name and the packaging and the advertising, all of which is a departure from the muted elegance the perfume house has long been known for.

So I figured I'd detest Prada Candy, but I was pleasantly surprised. They stuck with perfumer Daniela Andrier, who developed most of the Prada fragrance line, and she's done something that might reasonably be called Candy without being a complete pander-to-the-masses sellout. In fact, while I don't adore Candy, and it isn't going straight onto my buy list, I enjoyed wearing it considerably more than the last two feminine efforts from Prada (Infusion de Tubéreuse and Infusion de Rose). If a bottle of Candy fell into my lap, I can see wearing it happily as a fall/winter comfort scent.

Candy is a woody gourmand oriental, and the notes are listed as musks, caramel and an overdose of benzoin (reportedly 12%). The opening smells like a fruity-sweet benzoin, far from sheer but not too heavy, with brief flashes of root beer. The fruity notes slowly fade and are replaced by creamy caramel vanilla over woody musk. It's soft and powdery — every so often, I catch a nod to Infusion d'Iris — and the dry down is warm and subtly spiced, and much drier than the opening. Late in the game, there is just enough of a dark woody undertone to push it into the "sexy" category. So far, I've seen comparisons to Aquolina Pink Sugar (but it's scads more sophisticated than that) and Serge Lutens Un Bois Vanille (going on memory, that one is smokier, woodier, foodier, more complicated).

I doubt I'd spray it on lavishly for a hot and humid summer day, but it's been just fine in the mild-for-August weather we've been having here lately. I found the lasting power perfectly reasonable.

Nicely done, and very much worth a try if you need something vaguely edible but not quite candied for the fall. I predict it will find plenty of fans in the perfumista community, although the two blog reviews I've seen so far (see Another Perfume Blog and Scents of Self) have been less than glowing. 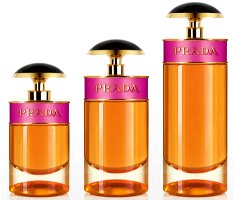 By the way, the juice sprays directly out of the cap, or another way to put it is that properly speaking, it has no outer cap. It is only a matter of time before every tester on earth is broken because impatient people like me keep pulling the whole top off.