Candy L’Eau is the latest from Prada, and it's meant to be a lighter version of 2011′s Prada Candy. And yes, that's just what it is — the start is fresher, cleaner and paler, with plenty of bright citrus replacing the deeper fruit notes of Candy, and as it ages on skin, a lighter dose of Candy's root beer-ish benzoin. There's also less caramel sugar, less dark woods, and, well, less of everything: if you really wanted a summer version of Candy, or if the original Candy was just too much candy for your tastes, Candy L'Eau might well suit you just fine.

I'm a fan of the original and hadn't thought to want a summer version; Candy L'Eau didn't do anything to spark my desire. The white musk in the base is a shade too functional for my tastes — now and then, there are vague echoes of dryer sheet — and while the overall smell is reasonably close to the original, it seemed sort of like they'd taken most of the fun out of it. It's not bad, but I'll pass.

Candy L’Eau was developed by perfumer Daniela Andrier, who also did the 2011 Candy fragrance. The notes include citrus, floral notes, white musk, benzoin and caramel. It is available in 50 and 80 ml Eau de Toilette.

Dolce & Gabbana The One Desire 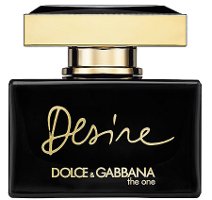 I have smelled the original Dolce & Gabbana 2006 scent The One, but I didn't care for it and I've mostly forgotten it, so I can't answer the most obvious question — how does the new Desire flanker compare. The only reason I chased after the flanker is because it's come up here several times in the comments as being similar to, or maybe even better than, the original Prada Candy.

With apologies to its fans, I'm sorry to say that I am not among you. It is a gourmand, and in many ways it follows the same fruit-flowers-candy progression as Candy, without the heavy benzoin but with a Candy-like thread of caramel running through the later stages. The One Desire places more weight on the florals in the heart, but my objection is all about the fruit, which is particularly strident in the opening  — I'm not sure what fruits are present, and the lychee listed in the notes couldn't possibly be enough to account for my reaction, but I did not find it enjoyable to wear, and as with everything that one doesn't find enjoyable to wear, it has the half life of plutonium. Another pass.

The One Desire features notes of bergamot, mandarin, lychee, lily of the valley, tuberose, caramel-infused vanilla, sandalwood and musk. It is available in 30, 50 and 75 ml Eau de Parfum.

As always, if you've tried anything fabulous lately, do comment!