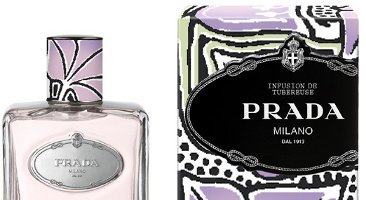 I like Prada. Not because of the fashion — regular readers here know I don't know a thing about fashion — but because of the perfumes, which for the most part (I'm ignoring Prada Tendré) have eschewed the aim-for-the-lowest-common-denominator approach of your average mainstream designer perfume brand. The Prada perfumes aren't wacky or outré, and they're not necessarily the sort of thing that will please your jaded, niche-snob perfumista, but they're well-crafted, and they strike me as perfumes made by people who care about the product as much as they care about making money. I'm as jaded as anybody, but I'm entirely willing to believe perfumer Daniela Andrier when she says Prada gives her more money to work with than other brands.1

It is precisely because I like Prada so much that last year's Infusion de Fleur d’Oranger was such a disappointment. It was the first in a new series of limited editions, the Ephemeral Infusions.2 According to Andrier, the "idea of Infusion is almost as an imprint of the chosen material in water, a kind of watercolor fragrance reworked with colorful pastel crayon"3 — doesn't that sound delightful? And it worked out perfectly, for me anyway, in the original that preceded the series, Prada Infusion d'Iris, and also in Prada's recent L'Eau Ambrée, which was not part of the series but which took a very similar approach. In Fleur d'Oranger, the approach fell flat; with apologies to its fans, it reminded me of baby aspirin and laundry detergent.

So, now we're at year two of the Ephemeral Infusions, and Prada has two offerings: Infusion De Vétiver, which Kevin will cover tomorrow, and Infusion de Tubéreuse, my subject today. Tuberose is one of my favorite flowers, and as usual Prada has done a fabulous job on the packaging: even the outer boxes are gorgeous. But alas, I am disappointed yet again. The notes for Infusion de Tubéreuse include tuberose, petitgrain, blood orange and dynamone (an aromachemical with a 'tenacious faintly amber like odor'), and it's described as a crisp green floral. In the very early stages, it is a crisp green floral, with lots of juicy orange and leafy green undertones, and vague floral notes over a pale base that recalls Infusion d'Iris.

The crispness doesn't last — it so rarely does — and what we're left with then is the vague floral. Andrier had noted that Infusion de Tubéreuse uses "the fresh green buds of tuberose, rather than the very sweet lactonique mature petals", so I wasn't expecting a tuberose powerhouse à la Piguet Fracas. And I have no objection to a water-y, easy-to-wear tuberose: I do like Diptyque's Do Son, for example. But the tuberose in Infusion de Tubéreuse isn't just watered down, it's sanitized — that is, all the elements that make one think of tuberose are missing. If the fragrance wasn't called Infusion de Tubéreuse, I'm not sure I would have known that's what it was about. Worn next to Do Son, the Prada just seems wimpy, like it's afraid to speak up lest it offend someone. It does not help that the lasting power is less than wonderful: it seems to fizzle out just when I am hoping things might start getting interesting.

If you weren't after tuberose to begin with, Infusion de Tubéreuse might perhaps please you more than it did me, although I'm not sure I'd love it even if it was called Infusion de Fleur Nonspécifique — it does not annoy me, as did Infusion de Fleur d'Oranger, but it's too pale and faint and clean to captivate.

1. See Everything’s coming up rarities at How To Spend It.

2. Although how limited they are is hard to say. When Infusion de Fleur d'Oranger launched last year, Prada said it would only be on counter 4 months, but lo and behold, it's everywhere again this spring, even in new gift sets. Whether that means it sold so very well that they couldn't resist launching it again, or so very badly that they're hoping to unload what's left of their stock, I have no idea.