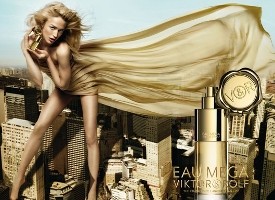 We are not interested in niche. Fashion is already for a small audience. We like to communicate with as many people as possible.1

That's Viktor Horsting of Viktor & Rolf, explaining the "blatantly commercial"2 appeal of their debut fragrance for women, Flowerbomb. Anyone hoping that they'd go for an edgier aesthetic with their followup, the newly launched Eau Mega, will be disappointed: Flowerbomb, while neither edgy nor esoteric, was somewhat over-the-top; Eau Mega, with its "extravagant freshness"3, is the sort of clean and pleasant and safe thing anybody could wear anytime, and presumably, Viktor & Rolf very much hope they will.

The tag line for Eau Mega is Megafy Yourself, and the fragrance...

...celebrates a new icon of femininity, in the form of a superheroine who, aided by her fragrance, transforms reality into her own universe of beauty and glamour and “megafies” the world.4

What does this megafied superheroine smell like? Well, like melon water and pear, of course, along with some of that FRESH! green citrus that's in everything now and that I talked about most recently in the review of Acqua di Parma Magnolia Nobile. The melon is short-lived; the pear lingers on through most of the proceedings. The heart is soft, watery florals, the base is very clean and very pale woody musk.

Eau Mega reminds me of a number of other fresh green florals of the past year: Versace Versense, Bvlgari Omnia Green Jade, Chanel Cristalle Eau Verte, Issey Miyake a scent by Issey Miyake. Eau Mega, while pleasant and likable, is my least favorite of that list — I don't like pear, but beyond that, I'd say it's the least distinctive of a not-overwhelmingly-distinctive-to-begin-with group of fresh, pleasant, casual fragrances. It's also the most expensive of the lot. 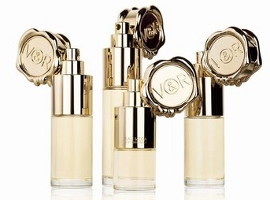 The bottle, which they're calling the Megamizer, is cute as a button to look at, but I hated it as soon as I tried to use it. If you were thinking about doing a bottle split or making decants, forget it: it takes two hands just to hold it and spray ("The fragrance is activated by pressing the gold Viktor & Rolf seal. A full nine pieces are assembled together to create this refined glass cylinder, which is adorned with a highly technical golden jewel."5). The poor woman in Nordstrom who made me a sample had quite a time of it. If you don't have to worry about getting the juice into a vial, though, it's arguably fun to use.