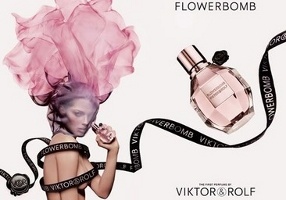 It starts with lots of sugar candy and a bit of citrus, and dries down to a sweet, slightly vanillic dessert of amber and patchouli. It is very smooth and creamy, with no hard edges. There are some flowers along the way, but they are not assertive. I should not think you would have to like flowers to like Flowerbomb.

For that matter, you won't necessarily need to like patchouli. It apparently uses a "purified" patchouli that is exclusive to IFF, the company that developed the fragrance, and in fact it smells very clean, and largely devoid of the earthy notes that tend to conjure up 1960s head-shops. I am not a patchouli fan, but one of the lessons that Flowerbomb taught me is that I like it even less without the earthy part.

Viktor & Rolf made it clear from the onset that they were not looking for an unusual, edgy scent in keeping with their design aesthetic, and they have succeeded in creating an easy to wear perfume that is likely to have widespread appeal to fans of sweet florientals. It is perhaps no surprise that almost every review of Flowerbomb I have seen mentions another fragrance that smells just like it. The prime candidate seems to be Angel, but Flowerbomb is a considerably more demure, well-behaved fragrance than Angel.

I believe Viktor & Rolf Flowerbomb is still exclusive to Saks Fifth Avenue (someone please correct me if I am wrong). It is $95 for 50 ml of Eau de Parfum.