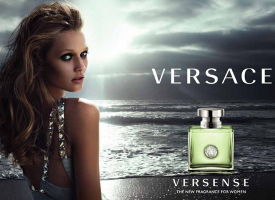 Versense is the latest fragrance for women from Versace, and as I posted last month, it promises to highlight notes from the Mediterranean and to "perfectly interpret the contrast between freshness and sexiness". Donatella Versace elaborated on the theme:

Versense perfectly represents the Versace woman. I created a fragrance to make her feel incredibly lighter. There’s something very optimistic and confident about being free, and it was that feeling that I tried to capture for Versense. (via Women's Wear Daily, 3/20/2009)

If lighter and fresher is what you're after, Versense might just fit the bill. Like yesterday's Essence by Narciso Rodriguez, Versense was developed by perfumer Alberto Morillas, and like Essence, Versense opens whistling-clean. The early stages are crisp, green, lemon-lime-y and fresh, with the emphasis on the fresh — it's distinctly Glade-ish in the opening (the notes: bergamot, green mandarin, citrus, prickly pear, fig, sea daffodil, cardamom, jasmine, cedar, sandalwood, olive wood and musk). The big fresh note fades somewhat on the dry down, but Versense stays light, fresh and crisp for the duration. The heart is a blended floral over woody musk, with vaguely fruity undertones lending some roundness. The cardamom, while subtle, adds some liveliness; otherwise, it doesn't smell like anything in particular to me other than perfume, and it did not call to mind anything about the Mediterranean (actually, what it called to mind was Bvlgari Omnia Green Jade, another recently released light & fresh & green fragrance by Alberto Morillas).

Versense is likable and wearable, even very likable and wearable — it's easily my favorite Versace scent for women. It's not what I'd call interesting (although it beats out the Omnia Green Jade on that score), and I don't find it particularly sexy (there is a wee touch of earthiness in the far dry down; still, in "interpreting the contrast between freshness and sexiness", freshness mostly won). It would make a great casual, no-thought-required summer cologne for someone who likes fresh notes (i.e., not me).

Versace Versense is available in 50 and 100 ml Eau de Toilette and in matching body lotion. The lasting power is pretty good.