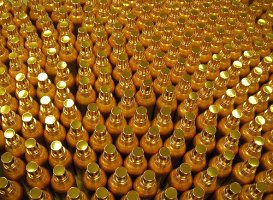 What is a bottle split?

In the simplest terms, you agree to split a full bottle of perfume with one or more other people. The first time I did a bottle split, I was after bottles of Ormonde Jayne Champaca and Frangipani but didn't want to pay full price for both scents, nor did I think I needed that much juice. I found 4 other people interested in buying a portion of each scent, so that each 50 ml bottle would get split 5 ways — each person on the Champaca split would get 10 ml of Champaca; each person on the Frangipani split would get 10 ml of Frangipani.

Splitting a bottle has a couple of important advantages over swapping for perfume or buying a decant. First of all, you can be assured that the product will be fresh, and you'll know your decant hasn't already been passed around to five other people (as can sometimes happen when swapping). And if you're hosting the split, your juice will remain in its original bottle instead of a decant container of some sort (in other words, you get to keep the bottle).

As a "splitter": hosting a bottle split

As the host of the bottle split, you are responsible for obtaining the perfume, making the decants, then packaging and mailing the product to each participant (see the swapping article for tips on packaging). You will need to work out in advance who will pay for what. The advantage to you as the host is that you get to keep the original bottle.

As with swapping, hosting a bottle split can be considerably more time-consuming than it sounds, and there are all kinds of things that can go wrong. Splittees can back out at the last minute, or take longer than expected to send their payment. Some perfumes are, of course, more difficult to decant than others. And as we all know, things do occasionally get broken or lost in the mail. You might want to consider working out in advance who will pay if something goes wrong.

My own cautionary tale of woe, from the Ormonde Jayne split mentioned above: I was foolish enough to do my decanting before measuring how much liquid went into the 10 ml decant containers I'd purchased. It turned out that they each held more than 10 ml, so that when I was finished, the portion left in the original bottles was considerably less than 10 ml — in other words, for all my trouble, I ended up with less perfume than anyone else. Worse still, one participant had asked if she could send her own decant container. The plastic atomizer she sent was poorly made, and it cracked down the side when I tried to get the cap on securely. Several mls of perfume leaked out before I could transfer the juice to another container, and since I had broken the container, I felt like I ought to send her the whole 10 ml she had purchased. I ended up with very little perfume left for myself.

As a "splittee": buying a portion of a bottle

As a splittee, all you have to do is arrange payment, whether by check, paypal, whatever, then sit back and wait. Things you'll want to be sure of before you come to an agreement: what you will pay for, what sort of container you'll receive the perfume in and how it will be shipped (you might consider delivery confirmation and insurance). And if you don't know the split host, you might want to ask if s/he has feedback tokens on MakeupAlley or another perfume swapping board (again, see the swapping article for more about feedback tokens).

Where to find bottle splits

Arranging a bottle split used to be easy as pie: you went to MakeupAlley and posted a message on the fragrance board ("Anyone interested in splitting a bottle of JAR Bolt of Lightning?") and hopefully, found interested parties. Unfortunately, as part of MakeupAlley's general crackdown on fun, they no longer allow board members to solicit bottle splits.

I've been considering holding a semi-regular "swap meet" for people who would like to arrange bottle splits. Maybe a new thread every two weeks, where you could post if you were looking for people to split a bottle with you? Please comment if you think you'd find that useful.

And experienced bottle splitters, please comment if you have any other helpful tips.

Note: image is perfume factory, via loungerie at flickr; some rights reserved.