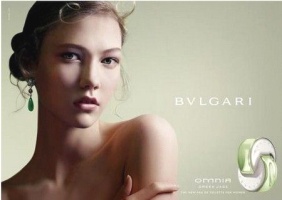 Omnia Green Jade is the third flanker to 2005's Omnia by Bvlgari (it follows Omnia Crystalline and Omnia Amethyste), and it was reportedly "inspired by the idea of an early spring morning"*. I'm a fan of the Omnia franchise — Omnia Amethyste left me cold, but I love the original Omnia and "really like" Omnia Crystalline — so I was looking forward to smelling the latest entry in the series. That it was geared young ("...the fragrance is aimed at a younger, more contemporary target consumer"**) was a little worrisome, since we all know that "young" in perfume-speak can sometimes translate as "candied" or "not for the discerning".

Turns out Omnia Green Jade is something else entirely: it's the lightest and freshest of them all, although since some people have trouble smelling Omnia and/or Omnia Crystalline at all, your mileage may vary. It's a wearable, safe-for-the-office, casual (and not at all feminine: anyone could wear it) fragrance, but it's not what I'd call distinctive, in fact, it's rather hard to describe other than "fresh", "green", "clean". It's crisp and citrus-y in the opening, but it softens rapidly. There is a bit of nutty warmth in the pale, woody-musky dry down (the notes: green mandarin, spring water, white peony, nasturtium, pear blossom, jasmine, pistachio, white woods and musk).

March at Perfume Posse correctly notes that it has a tea vibe, as do many of the Bvlgari fragrances — this could be a muted variation on their own (already muted) Thé Vert or Thé Blanc. While Omnia Green Jade is just fine if you're looking for something light and inoffensive, I'd recommend either of the tea scents first, and for that matter, if you want something light and clean but with an extra dash of pizazz, you might try Thierry Mugler Cologne, which as it happens was made by the same perfumer who developed all the Omnia scents, Alberto Morillas.