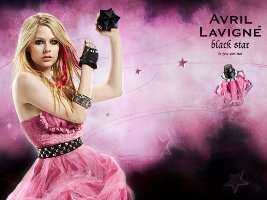 Black Star is the first fragrance release from pop star Avril Lavigne, in cooperation with Procter & Gamble Prestige, and it's being promoted as “a deliciously distinctive fragrance that embodies Avril’s individuality.” Lavigne herself comments, “It’s all about being edgy and feminine in a fun way,” and she reportedly requested the Eau de Parfum's dark chocolate accord, which is combined with notes of pear, hibiscus flower, and black plum.

Black Star's pink-and-black, star-shaped bottle (see below) isn't exactly a model of "individuality," since it looks like the love child of Thierry Mugler Angel and Viktor & Rolf Flowerbomb. It’s weightier in person than it appears in photographs, and it includes a removable, studded metallic band that can be worn as a ring or a necklace charm. The Black Star box is also printed with a “studded” pattern and texture, as a reference to the belts and bracelets that Lavigne typically wears. I did a little extra research for this review, since I thought I didn't know much about Avril Lavigne, other than that she’s a Canadian singer who sports a mall-punk style and that she infamously mispronounced David Bowie’s name at a Grammy Awards event. When I checked out a few videos, however, I realized that I’ve been absorbing her songs for a while, just by hearing them in stores and other public places. (And then I ended up humming Lavigne’s hit single “Complicated” for a few days.) 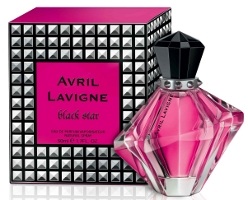 As promised, Black Star opens with a burst of pear and other synthetic fruit notes. The heart of the fragrance is a juicy, sweet floral, closely meshed with the plum note and perhaps some red currant. The base notes are gourmand, but not intensely so. Although the chocolate accord that went into the mix was originally very dark and velvety, in the final product it's tempered by the ongoing floral-fruity notes. Black Star is nowhere near as candy-like as Vera Wang Princess or Britney Spears Fantasy, for example. In comparison to other chocolate-based fragrances, it doesn’t have the androgynous, dry quality of Bond no. 9’s So New York or the sophistication of Rose Praliné by Parfums de Rosine, but since it’s intended for a younger, more “girlish” audience, that makes sense. And, notwithstanding the star bottle, it doesn't remind me much of Angel. Instead, its opening recalls the pear-and-sugar twist of designer Betsey Johnson’s eponymous fragrance, and its dry down could be a very distant, pre-teen relative of S-Perfumes 100% Love (a mix of chocolate, rose, and pulpy red fruits).

Black Star is nowhere near as “edgy” as it purports to be, but it succeeds in capturing Avril Lavigne’s image despite (or because of) that fact. We often complain that celebrity scents don’t live up to the personality or creative vision of their namesakes; well, in this case, Black Star embodies its subject pretty well. It’s like a well-crafted pop song: catchy and somehow familiar, packaged with a veneer of rebellion over a core of cute, and very well suited to girls in their early teens. Of course, if you’re older than that target audience (as I definitely am) and you’re looking for an accessible fruity-gourmand, you can still try it out as a guilty pleasure. Just don’t end up humming “Girfriend” in public.

Avril Lavigne Black Star is available for $29 for 30 ml and $39 for 50 ml Eau de Parfum, and can be found at Kohl’s stores nationwide as well as the Kohl’s website. For more information and a list of international vendors, see the Black Star website.