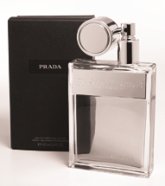 In addition to the amber accord, a fougère accord is added for contrast. To achieve the amber note, a combination of vanilla, tonka bean, labdanum oil and patchouli was used. For the fougère aspect, there's geranium, vetiver, orange blossom, myrrh and musk. Finally, leather notes are softened with a blend of saffron oil and sandalwood.

...top notes of juicy pear, tangerine, grapefruit and black currant; a heart of freesia, lily of the valley and apple, and a drydown of cedarwood, sandalwood, praline, amber and musk.

Betsey Johnson is an Eau de Parfum, and is available in 50 and 100 ml bottles and in matching body products. A men's counterpart is already in the works. Update: see the ad image for Betsey Johnson's scent here.

Created by Ellen Molner of Givaudan, Polo Double Black is a fresh Oriental scent composed of top notes of mango and pepper, middle notes of roasted coffee and Indonesian nutmeg and bottom notes of rich woods along with cardamom and juniper berry spices.

Ralph Lauren Polo Double Black is an Eau de Toilette, and will be in 75 and 125 ml.

(all above via Women's Wear Daily)

Ted Baker has launched Ted Baker Pride of England, a limited edition packaging of his Skinwear fragrance to honor the World Cup. (via purebeauty)

Spanish musician David Bisbal, "one of the most famous Latin singers", will launch his debut fragrance in Spain by the end of the year.

The Porsche Design Group, in collaboration with Parfums Azzaro, plans to launch a line of Porsche fragrances for men in 2008. (both above via moodiereport)