I'm sure many of you have had this experience: you read about a new fragrance. It sounds perfect. You start to build a smell-picture in your mind. You wait, and then you wait some more. It finally launches, but is only sold someplace inconvenient (there are few phrases in perfumespeak more dispiriting to me than "exclusive to Saks"). Finally, you get your hands on it. You spray, and — oh! It is not at all what you expected.

Un Jardin après la Mousson is the latest from Hermès and the third fragrance in their Jardin series, and it isn't the first of perfumer Jean-Claude Ellena's creations to surprise me in this way, although more often than not, I manage to adjust. I liked Osmanthe Yunnan as soon as I smelled it, but it somehow wasn't what I thought it would be, and I could not help but feel a sliver of disappointment. By the time I reviewed it I was feeling much more positive, but even then, I had no idea that it would turn out to be one of my favorite summer fragrances. Likewise, I didn't get the spunky leather I was hoping for from Kelly Calèche, but my respect for Kelly Calèche has increased dramatically since its release; I've worn it often (and quite happily) this spring.

So. My first thought on spraying Un Jardin après la Mousson was: cantaloupe! Followed shortly by: New West! I liked New West back in the day, but I just wasn't prepared for a melon-y aquatic note, and I wasn't entirely enthralled. Luckily, within seconds a whoosh of dry spice churns the melon into a froth (the notes: cardamom, coriander, pepper, ginger, ginger flower, vetiver accord). For a brief time, it reminds me vaguely of the spiced melon in Frederic Malle's Le Parfum de Thérèse — the Mousson could be the pale-fizzy-soda summer version*. The spices don't linger, though, and neither does the fizz. Twenty minutes in, I'm smelling transparent, indistinct florals over what is left of the cantaloupe, and a soft, dry base that recalls the "warm rocks" mineral note of Terre d'Hermès, minus the smoky gunpowder part. The vetiver accord is subtle and more clean than earthy.

Un Jardin après la Mousson is much quieter than the others in the Hermès Jardin series (2003's Un Jardin en Méditerranée, 2005's Un Jardin Sur Le Nil). That's ok with me; you regular readers know I'm a Jean-Claude Ellena fangirl, and his pared-down style suits me to a T. But...so far, I don't adore Mousson. I don't hate it, nor does it leave me entirely cold, as Paprika Brasil mostly did. But I'm not feeling the love.

It's a shame, since I now own lots of it (more dispiriting perfumespeak: "Sorry, we've only got the 100 ml size"). Admittedly, I haven't given it much of a chance, but since a few days of wear has done nothing to increase my ardor I'm going to set it aside for a month or so. We'll see how it wears in the heat of summer. So far, the reviews elsewhere seem to be markedly more positive than mine (I already linked to Victoria's review, and the early reviews on MakeupAlley give it five lippies out of five).

An aside: it does layer nicely over the Terre d'Hermès, and also works well with a tiny drop of The Different Company's Sel de Vetiver. 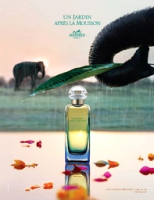 Hermès Un Jardin après la Mousson is available in 50 and 100 ml Eau de Toilette, and I believe matching body products are to follow. I don't know if it is sold in Hermès boutiques as yet (please comment if you've seen it there), but Saks Fifth Avenue does have it in stock. Update: Un Jardin après la Mousson will reportedly be exclusive to Saks and Hermès boutiques until September 2008.

* And I suppose it is heretical to wish for a Diet Thérèse, but it strikes me now that such a thing, if done right, would be lovely to have.