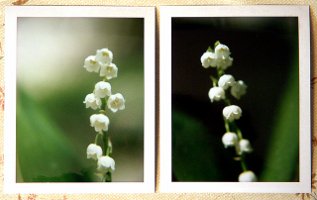 [Ed. note: if you missed it, see part 1 of Cabris and Art et Parfum]

Besides the Art et Parfum lab and office, the other white stucco building at Sainte Blanche is Michel Roudnitska and his wife’s home. Just beyond the house is a T-shaped pool with a long stem where his father, Edmond, swam laps. Closer to the house meanders a shady Japanese-style garden Michel Roudnitska laid out, complete with a tiny bridge and statues of what look to my untrained eye like Thai goddesses. Up the hill a stone's throw is the monument where Edmond and Thérèse Roudnitska’s ashes are interred.2

I kept a steady watch on the house while Olivier Maure, Art et Parfum’s director, went to fetch Roudnitska. I’ve never had the chance to meet in the flesh someone about whom I’ve read so much and whose fragrances I’ve worn (besides Noir Epices, I’ve worn Roudnitska's DelRae Amoureuse and DelRae Début).

At last Roudnitska emerged from the house and put away his cell phone. You’d think this would be where I’d tell you that, like Robert Redford and Tom Cruise, he’s shorter than I’d imagined. In fact, Roudnitska is tall — a Giacometti come to life with a long, graying ponytail and the sharp cheekbones of a Sioux. He doesn’t look like the type to spend a lot of time in a pinstriped suit lounging in high-rise boardrooms. He greeted Denyse with kisses (she’s been to Sainte Blanche a handful of times) and shook my hand. I was elated to discover he’s familiar with Now Smell This.

Roudnitska’s — formerly his father's — office is up a marble staircase with art-lined walls. A tall window on the landing looks out to the Japanese garden. Next to the office is a sheltered deck lined with planters of flowers and small shrubs. From its edge I saw hills rolling down to Grasse and the Mediterranean in the far distance. (Roudnitska, perhaps suspicious of my silence, asked, "Vous parlez français?" Thankfully, my comprehension is decent, even if I speak and write French poorly.)

The high-ceilinged, spacious office has an equally stunning view. Its bank of windows had heated up the room, so Roudnitska slid one open a crack. I greedily soaked up the atmosphere. A medium-light wood paneling forms a 1950s deco pattern on the walls, and a built-in desk of the same wood occupies one corner. Matching cabinets and shelves run along an adjacent wall. Another goddess bust and bottles of Michel Roudnitska’s work stand on the top of one credenza-height shelf, but the wall above it is nude of art, presumably to act as a screen for the wall-mounted projector on the other side of the room. Whoever designed the room had a keen eye for warm, elegant, and slightly unconventional style.

We sat in a corner grouping of armchairs and couches, and Roudnitska told us about a fragrance, Invocation Miwahïmoon, he recently created for Blue Eagle Invocation, a Canadian company. (He has the charmingly boyish habit of sucking in a quick breath between strings of sentences.) The fragrance is all natural and marketed as a “feminine liquid smudge” to promote wellbeing. Roudnitska worked with First Nation shamans to identify essences associated with clarity, harmony, and other beneficial energies. Rather than simply dumping them in a bottle and using them medicinally as a shaman might, he choreographed their blending with a perfumer’s sensibility. He said because of IFRA restrictions, the fragrance will have limited availability. (Capsule review: Miwahïmoon smells soft, full-bodied, and citrus-herbal-balsamic.)

As Roudnitska talked, my gaze traveled to a black-and-white framed photo behind his head. It looked like Edmond Roudnitska and a crew-cut boy (Michel?) on Sainte Blanche’s bleak hillside before its gardens were planted. So much life — and perfume — yet to come.

Another post gone, and I still have more to report on France…

1. Sadly, it was also the first fragrance I ever swapped. I kick myself for it regularly. Dumb dumb dumb.

2. Another landscape note, but not of Cabris: I’m writing this from the terrace of a house in a village perché in Languedoc, France. I just heard — no joke — a cuckoo bird singing somewhere in the hills. A freakin’ cuckoo. And here I thought they were the invention of Bavarian clock makers.