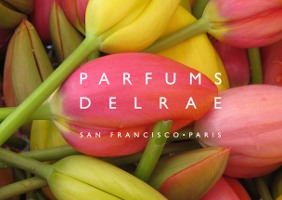 They started with a trio of perfumes: Amoureuse, Eau Illuminée, and Bois de Paradis; Début followed in 2004.

The DelRae line can be found in the US at Beautyhabit, Luckyscent. In Germany, try First in Fragrance.

See all articles on Now Smell This tagged Parfums DelRae.

Read an interview with DelRae Roth at Osmoz, and The art of conjuring up a fragrance at the New York Times.