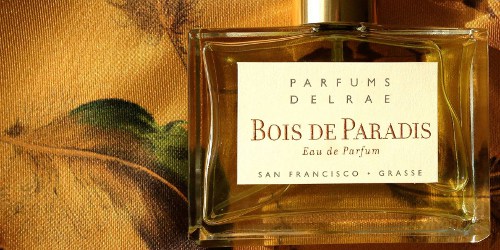 Nearly a decade ago, I sampled Parfums DelRae Bois de Paradis at a big city chi-chi perfume boutique. The person helping me sniffed my forearm and shook his head. “No. Not for you.” And that was it. I figured Bois de Paradis and I suffered a chemical mismatch. So, I moved on.

Last week, I stumbled over my Bois de Paradis sample vial and decided to ignore the long-ago opinion and give it another try. I loved it! Bois de Paradis is a big-shouldered, purple-lipped, quick-to-laugh friend of a perfume, and it went straight to my “to buy” list to pull out when I want something easy and cheerful that won’t bore me.

Bois de Paradis isn’t mysterious. What you smell — purple fruit, dark pink rose, wood, a leavening of jasmine and hint of incense — is what you get from first dab to last whiff several hours later. It’s friendly and welcoming, and it doesn’t take years of smelling fragrance to appreciate. Mom will like it. Your grade school niece will think it smells great. No one will trot out the “smells like an old lady” business.

But Bois de Paradis isn’t banal, either. It’s not a fruity-floral cocktail that feels like it should be served in a punch bowl at sorority functions. It shows what good materials and a sophisticated grounding of incense can do — and, unlike so many popular fruity florals, all without an overdose of patchouli.

I know I spend a ridiculous amount of time anthropomorphizing fragrance, but on first sniff, Bois de Paradis popped fully formed into my mind as someone who might play the wise-cracking best friend in a 1940s movie. She’s a messy brunette with an alto pull to her voice. I picture her wearing a tropical flower-printed kimono and pacing the living room, gesturing and laughing (maybe just a little too loudly) and talking about last night’s party.

Parfums DelRae’s last release was Wit in 2014. I wrote to DelRae Roth to find out if the perfume house has anything new in the works. Roth replied that she’s been “working on a new fragrance for quite some time now,” but even with further prodding, she wouldn’t give hints of what the fragrance was about or when it might launch. We’ll just have to wait.

Have you ever ruled out a fragrance based on your skin, then returned to it for a completely different impression? Bonus question: what fragrances do you find easy to wear, but not boring?

Parfums DelRae Bois de Paradis Eau de Parfum is $150 for 50 ml. For information on where to buy it, see Parfums DelRae under Perfume Houses.