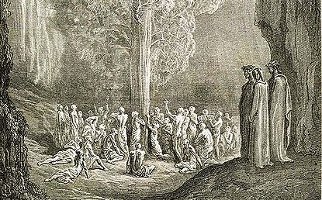 My guess is that most obsessive perfume samplers have the equivalent of Robin's purgatory basket. As someone who suffers from chronic indecision, I have a large collection of scents I just can't decide whether I like or not, separated into a series of elegant "snack-sized" plastic freezer bags. Every couple of months I retrieve all of these baggies and place them on my bed, along with two larger plastic tubs, which house, respectively, fragrances in the current rotation (scents in good standing) and samples that I see every couple of months when I perform this ritual (the tub of no return). I spread the contents of the purgatory bags over my duvet and begin picking through the vials and atomizers, sorting them into piles: judgement rendered, cult favorites that need one more try, scents that have somehow eluded skin-testing. Like Robin, I always end up with a pile of scents that stubbornly resist categorization and tubbing. As my spouse looks on with bafflement and mild disapproval, I return these fragrances to the twilight, limbo land of the snack bag.

The firmer, sterner souls among you probably agree with my husband. With multiple new fragrances being launched every single day, why does anyone bother trying to puzzle out their complicated relationship with one? Well, my problem is that I often prefer the interesting to the simply likable. Perfumes that command my attention over the course of many months are inevitably admirable, well-crafted fragrances and I never feel my time contemplating their mystery is wasted. Perhaps my initial research convinces me I should love a scent. The notes, the perfumer, the blog reviews... even the Magic 8-ball says "Signs point to yes". But upon first, or seventh, or thirty-eighth sniff, something is missing. I have the type of personality that attacks with weird glee the task of identifying missing somethings.* Also, following Robin's example, I return doggedly to close-calls, remembering the gradual way I came to love many of my favorite fragrances.

Or perhaps the note list or release buzz for a scent strikes a silly yet fathomless fear into my heart. In this case, I seek the scent out because horrible smells are often interesting. (Remember, I admitted I have a problem.) Sometimes the fragrance surprises me by being clever and genre-busting. It smells good. I admire it. But do I like it? The 8-ball says "Ask again later". I can't disagree with that, though maybe you have a more definitive comment.

Calvin Klein Truth: Despite not being a fan of this brand, I used to think Truth should have my name on it. If you strip out the comical ad speak, the notes include bamboo, peony, lotus, a rainwater or dewy accord, cedar, vetiver, patchouli, vanilla and a considerable quantity of musks. Whenever the difficult topic of a personal HG comes up, I mention my dream of the perfect chord of green or citrus notes ringing over a creamy floral base. Calvin Klein positioned Truth as a transparent woody oriental "inspired by the lush freshness of nature and the warm sensuality of skin" and the reviews by the many fans of this fragrance made me believe it could be The One. Upon sampling, though, I found the creamy-soapy heart verges on oiliness and makes me a bit queasy. There are lovely leafy-green touches that weave in and out of this nondairy whitener effect, and sometimes I think I've finally fallen for the blasted thing. But then the feeling goes away.

L'Artisan Parfumeur Aedes de Venustas Eau de Parfum: Curiouser and curiouser, as Alice would say. After reading Kevin's review for the Aedes Parfum d'Ambience, I went to considerable trouble to get a small sample of the room spray, as Aedes refuses to ship to Canucks. I enjoyed the home fragrance and looked forward to the release of a personal perfume. When the Eau de Parfum was launched, the note list was both longer and more enticing than its predecessor: orange oil, pink and black pepper, cardamom, incense, rose, iris, cedar, patchouli, coffee, opoponax, moss, immortelle, musk and vanilla. My sample of the Eau de Parfum puzzles me, though. I miss the stronger immortelle and the flat, dry quality of the incense in the room fragrance. The skin scent is undoubtedly a complex, high-quality creation — my husband even took rare notice and proclaimed it "excellent" — but the texture bothers me. It is too buttery, I think. Nobody hold me to that statement, though. I could love it tomorrow.

Crazylibellule and the Poppies Tamara Charleston: Back when Robin posted on two other choices from the Les Garçonnes collection, she added a comment on this one: "Tamara Charleston I alternately loved and hated…decided in the end that I hated it." I might be leaning the other way, but I haven't decided, of course. Of the collection, this is the CrazyStick with the most niche flavor. As with many scents that linger in purgatory, it seems like an original idea executed with a squinting, single-minded focus on just getting the thing to work. Inspired by the work of Tamara de Lempicka, the scent shares with the paintings both a narcotic, neck-cricking languor (jasmine, gardenia and a clean white floral molecule called yislang) and a bold, unsettling use of color (very green mandarin and peach, absinthe and a note like sugar peas). It smells kind of like surface disinfectant, but that could be what I like about it. For $16, it's provided me with hours of neurosis. A bargain.

Hermessence Vanille Galante: After a promising start, the news on this one took an alarming turn. Early reports mentioned that it did not smell particularly vanillic, which raised the unwelcome specter of the misnamed Paprika Brasil. Then Robin's review appeared, with the description "lilies floating in salty water". To control my distress, I tried meditating on the vanilla-tinged Serge Lutens Un Lys, which is one of the few lily soliflores I like. As it turns out, Vanille Galante is a much better fragrance than Un Lys. I recoiled in horror the first time I smelled its haze of salicylates and ylang, but repeated spritzes have given me an appreciation of its cool, airy sweetness. It could be a stream-lined, less fleshy version of Annick Goutal Passion or a brilliant summer flanker for Kenzo Amour. It is, therefore, rather close to what I imagine my elusive HG to be. I find it beautiful, but a little aloof and I often sniff my sample without being moved to wear it. Talk me into loving this one.

LeLabo Neroli 36: I am not very fond of neroli fragrances, so was relieved to find this wasn't one and was bottled barbershop instead, with an apricoty soap smell, a brisk brush of powder and the steely bite of sterilized shears and combs. Still, I can't say I like it particularly... I just can't give up on it.

*That type is ENTP in the Myers-Briggs, in case you were wondering. Years of self-observation and collection of anecdotal evidence have lead me to the hypothesis that a great number of nerds are ENTPs.