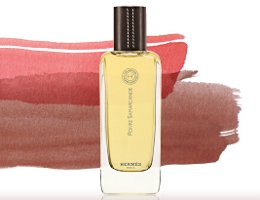 As long as we are talking about the Hermessence line from Hermès (see yesterday's review of Rose Ikebana), I thought I would pull out my sample of Poivre Samarcande and give it a real try on skin. A quick smell on a test strip last fall had convinced me that it was too masculine a fragrance for me to pull off, but test strips are such a waste of time that I don't know why I bother. Poivre Samarcande is meant to mimic velvet, and has notes of pepper, chili pepper, oak, cedar, chinese moss, and musk.

Poivre has strong pepper top notes; as it dries down, the wood notes intensify, but it stays very peppery, and very dry. It is also very minimalist, and it is worth quoting Jean Claude Ellena, the nose behind the Hermessence perfumes, on this subject:

"These are not light fragrances," explains Ellena. "But they're not these 'big stories,' like some complex fragrances can be. Instead, I think of them as little haiku." (via W Magazine, September 1 2004)

Interesting, because just as Rose Ikebana is reminiscent of Yves Saint Laurent In Love Again, so Poivre Samarcande immediately reminded me of yet another Jean Claude Ellena perfume: Cartier Declaration, but Declaration stripped down to its bare, essential elements, and jazzed up with lots of pepper. There are also hints of two other notes used in Declaration, coriander and cumin. From the same article:

Clearly, Ellena's nose is up to the task of creating olfactory poetry. "In the smell of sweat, I can discern cumin; in bubblegum, jasmine; in truffle, leather; in roses, rhubarb; in amber, honey," he says. His goal in creating the Hermessences was to let the rest of us in on his subtly scented world. "The main idea is to show what vetiver or poivre means to me," explains Ellena. "I tried to put what I call intelligence in the perfume ... to see perfume in a more intellectual way."

I, obviously, do not have Ellena's nose. I do not find jasmine in bubblegum, and I don't find cumin in sweat. But even my uneducated nose can find the sweat in cumin.

A little bit of sweat is not always a bad thing in a fragrance, and I think I have already mentioned Annick Goutal's Eau du Sud in that regard. The sweat in Cartier Declaration is too much for me; in Poivre Samarcande, it is lighter, but it is very much there. There is also a touch of something else, which might be the moss but which smells like tobacco or leather. The combination is not really too masculine, exactly, but of the four Hermessence fragrances, this is the one I would be least likely to wear.

Freskagirl commented yesterday that Poivre layered nicely with Rose Ikebana, and I would agree. The mixture doubles the foody quotient in an interesting way, minimizing the grapefruit and cumin and emphasizing the rhubarb and pepper. It is rather nice, and those of you bored stiff by Rose Ikebana might find it an improvement, although if it bored you, you probably don't have any on hand.

Like Rose Ikebana, it is relatively short-lived. For purchasing information, see the listing for Hermès under Perfume Houses.