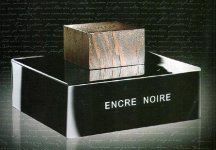 Two concentrations will be sold, an Eau de Toilette and an Eau de Parfum; both bottles are in black glass with stoppers made from wengé wood. The bottle for the Eau de Parfum (shown) was inspired by a 1913 Lalique ink pot. (via osmoz, fashionmag.fr)