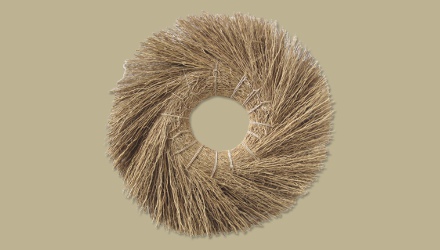 This is the second of my seasonal posts for vetiver (I've already done a list for summer), and as always, the line between the seasons is perhaps a bit arbitrary and/or personal: some of these fragrances wear just as well in summer or winter, and some of them work perfectly fine all the year round. But certainly any of the five would work just fine for autumn weather. As always, do add your own picks in the comments!

The Different Company Sel de Vetiver: It's meant to recall the smell of salt drying on skin after swimming in the ocean, but to my nose, its warm, earthy character places the swim sometime in late September or early October, if you'll allow the conceit. Certainly it isn't summery, or beachy, in any traditional sense, and you might not immediately place it in the vetiver category either. Unusual enough to be worth a try even if you don't always love vetiver.

Lalique Encre Noir: The Lalique, on the other hand, is more tightly focused on the vetiver, and I wouldn't recommend it to anyone but a serious vetiver fan. It's dark and inky enough to live up to its name and its chunky inkwell bottle, and earthy enough to qualify as a true vetiver fragrance. It wears relatively sheer, though, so it's not at all overbearing or difficult. (Later, Lalique introduced Encre Noir Pour Elle, a paler and blander version with much less of a vetiver presence. I think that one is now discontinued? A woman can easily wear the original anyway.)

Etat Libre d'Orange Fat Electrician: Angela called Fat Electrician "robust", and noted that "It kicks in from the start with sharp, rooty vetiver backed with enough opoponax and medicinal myrrh to make it smell as resinous as incense. Vetiver incense." It's one of my favorites from this arguably overextended and overhyped brand.

Parfums de Nicolaï Vetyver: A little less vetiver-centric than some of the others listed here, this spicy entry manages to feel simulataneously bright and warm. I have tried it several times over the years, and each time I regretfully conclude that no, I still can't wear that much cumin. If you think you can, do give this one a shot.

Etro Vetiver: An almost-smoky vetiver with tobacco and cypress, it's every bit as earthy and robust as a good vetiver fragrance ought to be, and I'm surprised I don't see it mentioned more often. It's one of Kevin's favorites, and he recommends it for anyone who likes Maître Parfumeur et Gantier Route du Vetiver (which will make my winter list for sure) but finds it hard to wear. (If they were still making Honoré des Prés Chaman's Party, it would be the alternative.)