Midnight Fantasy takes on the same bottle shape as the Fantasy fragrance, launched in 2005, but in a midnight blue version.

The fruity, floral blend for women includes notes of black cherries, plum, orchid and freesia with base notes of musk and amber. It was formulated by Givaudan’s Caroline Sabas.

Like the earlier Britney Spears fragrances, Midnight Fantasy was created under arrangements with Elizabeth Arden. (via cosmeticnews) 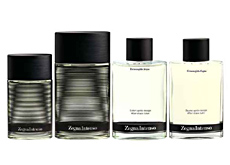 Described as the most sensual and virile Zegna fragrance to date, the juice features light and dark elements – an olfactory chiaroscuro – and is a fragrance of contrasts, according to YSL.

The light side comes courtesy of fresh notes such as green mandarin and Italian lemon, offset by a touch of cardamom and pink peppercorns. The dark side is represented by oriental notes of iris, vetiver, woods and musk. (via moodiereport)

Update: ZegnaIntenso was created by perfumer Daniela Andrier. (via cosmeticnews) It is available in 50 and 100 ml Eau de Toilette, and in After Shave Lotion, After Shave Balm, Deodorant and Shower Gel.