Not unexpectedly, the multimillionaire star was drawn to the most expensive raw materials in recreating the memory of her mother's perfume from more than 40 years ago, the perfumer revealed. "She has a real appreciation of luxury," he enthused. But when cautioned about safety restrictions on her favourite ingredients imposed by the International Fragrance Association (IFRA), she became exasperated. "F*** IFRA!" she snapped at one point.

— Perfumer Stephen Nilsen talks to Katie Puckrik about what it was like to work with Madonna on Truth or Dare. Read more at Madonna's perfumer suggests the popstar remains a hard to woman to please at the Guardian. 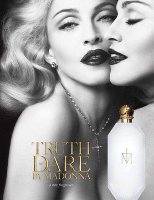 Truth or Dare is the debut scent from pop icon Madonna. I am frequently forced to “research” the “celebrities” whose perfumes I review here, but even I know who Madonna is, and so I assume you do too. An informal survey of young people (ok, I just asked my tween son) reveals that her fame is wide enough to cross generational boundaries, but Truth or Dare is aimed at a more mature audience than most celebrity fragrance efforts, albeit not one quite so mature as Madonna herself — they’re after women 25 to 45, with special emphasis on the 35 to 45 group. Once you cross 45, as we all know, you’re safely outside of the fragrance industry’s radar.

Truth or Dare is apparently associated with Madonna’s new lifestyle brand of the same name (next up: shoes), and it was made under licensing arrangements with Coty. I’ll repeat the statement from Madonna that I quoted when I announced Truth or Dare:

I have no idea what Madonna’s mother wore, but I’ve always heard that Madonna herself wore Robert Piguet Fracas, and it’s easy enough to believe that Fracas was the reference for Truth or Dare — Truth or Dare is basically a big ole white floral with an armload of tuberose and a gardenia tucked behind the ear…

In my usual attempt to clear out the docket before the end of the year, here are some quick reviews: Vince Camuto, Miller Harris La Fumée, BCBG Max Azria. 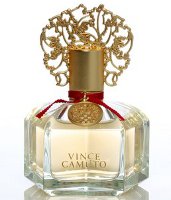 Vince Camuto’s eponymous debut fragrance was made by Parlux, the same folks who’ve brought you fragrances by Paris Hilton and Jessica Simpson — but before any of you anti-celebrity-fragrance perfumistas turn your noses up (pardon the pun), they also did the lovely Natori fragrance. The Vince Camuto is a floral chypre, in the modern (yes, it’s really an oriental) style, with a fruity top and a lightly spicy, sweet floral heart over a subtle leather and clean patchouli dry down. It turns drier and almost-smoky near the end. It does not, as it turns out, rival Natori (it’s in Macy’s instead of Saks, and in this case, it all fits) but it’s nicely done. If you’re looking for a sweet-ish, middle-weight oriental for winter and don’t want to cough up the dough for Natori, it’s worth a shot…

Madonna will launch Truth or Dare by Madonna, her debut fragrance, in March under arrangements with Coty. The fragrance is associated with her upcoming Truth or Dare lifestyle brand, and will be geared at women 25-45… 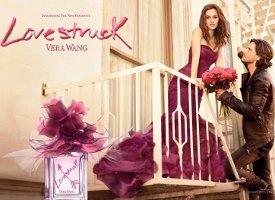 So you’ve grown out of Princess (and its many spawn, from Flower Princess to Preppy Princess) but you’re not ready for one of the signature (read: wedding-appropriate conservative floral) fragrances from Vera Wang, what to do? Vera Wang would like you to consider their new Lovestruck, fronted by actress Leighton Meester. The theme, as you might have deduced from the balcony scene in the ad: a modern twist on Romeo and Juliet.

Lovestruck is a musky floral with your standard fruit bomb opening (tart guava jam and citrus), a cheerful middle-weight fresh floral heart (allegedly tuberose and lotus blossom, and there are vague suggestions of both) and a pale woody-musky dry down (something that could stand in for sandalwood, a little drop of creamy vanilla, plenty of clean musk).

It’s wearable, and it’s not overly sweet or fruity once the top notes fade…