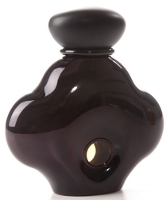 Bethany manages the perfume counter at my local Saks Fifth Avenue. She's helpful and looks like a 1940s film star, but best of all she genuinely seems to like perfume. Instead of spritzing a fragrance on paper and saying the words we hear so often in department stores ("It's beautiful, we all love it, why don't you treat yourself?") she's as likely to hand me a sample and shrug and say, "Tell me what you think." So when she was excited about the new Natori Eau de Parfum, I had to try it.

The curtain on perfume marketing lifted for me for a moment when Bethany talked about her introduction to Natori. She said before a perfume launches, perfume marketing staff sometimes fly in from Seattle or San Francisco, take the cosmetics sales associates to lunch or bring in food, and make their pitch. In the case of Natori, besides being treated to lunch, the Saks sales associates watched a DVD in which Josie Natori talked about how she grew up in the Philippines with perfume around her, and how her grandmother scented handkerchiefs to put in her purse. She said that perfume nourished her more than food. (Bethany noted that Natori was on the slender side.)

In 1984, Natori released a fragrance, also called Natori. The latest version of Natori, created by perfumer Caroline Sabas, was based on the original version. Natori's press release says that it has notes of "sparkling aldehydes, rose, plum, ylang-ylang, purple peony, night-blooming jasmine, patchouli, amber and satin musk accord".

Natori is a mature woman's fragrance. It opens with a perfume-y burst of aldehydes floating over jasmine and amber. Natori's 1980s roots are discernable in the gentle balsamic chewiness that underlies its floral heart. At first that had me worried. But Natori doesn't snowball into an avalanche of  patchouli, spice, and balsam as did so many Yves Saint Laurent Opium clones. Instead, Natori makes use of the trick every good driver knows: the smoothest stop comes from easing up on the brakes just before the car reaches a standstill. In this case, rather than crash into amber, spices, and balsam, the fragrance melts into a light musk. Neither Natori's fruit nor its patchouli stands out. If I had to transform Natori into a person, it would be Marisa Berenson.

Natori doesn't seem particularly original to me, but I can't think of another perfume released in the past few years that smells like it. No pink pepper, no tropical fruit, and no bug-spray-like woody musk infest this fragrance. Instead, Natori smells like something from the 1970s discovered on the back shelf of a perfume shop. It is unapologetically, classically aldehydic, like Rochas Madame Rochas, but its warm floral oriental body suggests a later era.

Natori's bottle is marvelous to look at and to hold. It is an almost-black purple glass, heavy in the hand, and shaped like something Harry Potter might store potions in. On the side of the bottle the glass thins and clears over a dime-sized hole so that you can see the juice inside. Its cap is metal and feels smooth and weighty like a river rock.

Natori Eau de Parfum has moderately strong sillage and good lasting power. Today, twelve hours after one spray, I can still smell it on my arm. I find Natori too assertively feminine to wear to the office, but you might not. I have a feeling I'll be reaching for this one a lot come fall. Natori will be released August 16th as a Saks exclusive. A 100 ml bottle of the Eau de Parfum is $115, and a 50 ml bottle is $85.