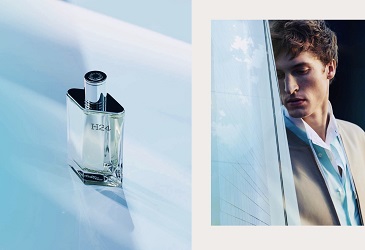 I've been working from home over a year now, hiding from COVID-19. During that time, several bottles of perfume have joined the family but not one stitch of new clothing has taken up residence in my closets or dresser drawers. (I've not even had the chance to wear clothes I bought in anticipation of last summer.) When I saw the Hermès H24 fragrance ads, my eyes did not land on the H24 bottle but strayed to the H24 model's jacket and shirts, in those beautiful, soft, calming colors of stone, sky and clouds. The clothes interested me more than another bottle of perfume, especially one in such a sporty, Lacoste-type bottle.

The transition at Hermès from house perfumer Jean-Claude Ellena to Christine Nagel has been a bumpy one for me. Since Nagel's arrival and the debut of her perfumes, I've not bought one new Hermès fragrance. Most of Nagel's offerings are simply not my style, but a few I've downright hated: Eau de Citron Noir (sour) and Un Jardin sur la Lagune (out of date "mall cologne"). I certainly didn't adore all of Ellena's output either; Le Jardin de Monsieur Li made me pity Monsieur Li, whose garden had apparently been inundated with soapy runoff from a nearby hair salon that used cheap-smelling shampoos, conditioners and badly scented hair dyes. Ick. But, boy, did I buy, buy, buy when Ellena was in charge! Just looking at the Hermès perfumes we've reviewed here at Now Smell This, I bought full bottles of 15 fragrances created by Ellena. 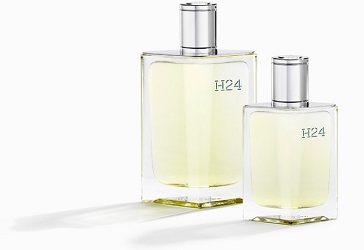 In press materials and Nagel interviews, there's been a stress on "natural" materials used in H24 and I'd like to comment on that first. H24 is advertised to contain clary sage (Salvia sclarea), narcissus and rosewood. After smelling the fragrance, I'd compare those "naturals" to a person who spent a lot of time and money at the plastic surgeon's office — getting lifted, suctioned, plumped, sculpted, frozen, lasered and peeled. After all those technical procedures, the person is still "natural"...but maybe a bit strange to behold. The "naturals" in H24 are likewise tweaked to the point of unrecognizability. For instance, the narcissus in H24 (I assume it's either Narcissus poeticus or Narcissus tazetta) was co-distilled with a "mystery" material to achieve a new smell.

H24 starts with the scents of crushed, fresh leaves, unripe fruit and a glint of citrus peel (grapefruit?); the aroma is neon bright, green and tangy. What comes next is linear and blurred: herbal greens and an indistinct floral aroma (sometimes a bit rosy). And so it goes until a murky water note drips in (metallic and definitely NOT fresh). This note is most likely Sclarene and it reminds me of the scent of a dry cleaning establishment my mother took our clothes to when I was a child (not a scent I'm interested in experiencing on my body). BUT: on me, the Sclarene disappears quickly; if you don't pay close attention and put nose to skin, you may miss it. After that quirky expression (I think Nagel appreciates a dash of "stale" in her scents*), we're back to greens (more realistically sage now), this time with a touch of light woods and amber. H24 in its long-lasting base smells more "traditional," warmer, richer, masculine in character.

I like H24 but it's not to my tastes; it smells like a rich herbal cologne/fougère (with sage replacing the lavender). H24's lasting power is excellent and it has good sillage. For those of you who like the Hermès "jardin" series (and vibe), H24 would fit into that group (a cross between a potager and a greenhouse).

As for my Hermès shirt/jacket combo? It's over 31 times the cost of a 50 ml bottle of H24, and since I'm still not certain I'll be out and about this summer, I'll hold off on THAT purchase.

* I remember this from Angie's review of Mauboussin:

For Mauboussin, it feels like Christine Nagel chose only materials that were similarly past ripe but not quite rotten. The peaches, plums, and mandarin oranges seem to have been laid on a radiator for a few days to stew. The roses, jasmine, and ylang ylang were left to decay into potpourri and sugar....