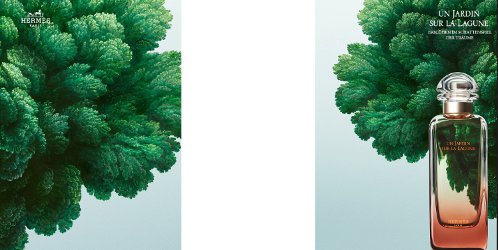 A bit of background: The sixth in the Hermès Jardin series, and the first from perfumer Christine Nagel, who took over as the house perfumer in 2016.

The inspiration: The Jardin series perfumes generally find an inspiration, however manufactured it might be (remember The Perfect Scent: A Year Behind the Scenes of the Perfume Industry in Paris and New York by Chandler Burr?), in some exotic garden someplace else — that is, not in New Jersey (which really does have lovely gardens, but you know what I mean), or your own backyard. Un Jardin sur la Lagune was inspired by a 'secret walled garden' in Venice, built by 'an English Lord', which turns out to be the Giardino Eden, not only a garden at a destination many of us would like to visit (or visit again), but a garden that regular people can't visit at all, since it is not open to the public. Nagel, of course, got her hands on the key, and I'll repeat a blurb I posted earlier in the year:

She was bewitched by its abandoned romance and returned through the seasons, as she told me, delighted by its poetry and its strange, haunting melancholy. In April, for instance, the pittosporum tree was completely covered with yellow and white flowers, smelling like orange blossom or jasmine, whilst in June, as Nagel recalled, “the magnolia smells so delicate, and of course the odor comes from the sky!” She also loved the smell of the trees’ roots, which cover the ground “like the lines on your hands” because they can’t burrow into the salty earth. The fleshy saltwort, the Madonna lilies, and the smell of the salt air were also amongst the smells that the alchemical Nagel...blended together into her fragrance...1

The juice: The notes (so far as we know: Hermès does not like to talk about notes) feature Madonna lily, magnolia, pittosporum, white musks, wood and aquatic notes.

What it smells like: The opening is tantalizing — for a brief time, I am perfectly willing to entertain the romantic vision of wandering through this secret, overgrown garden, near water, on a sunny day. There are slight hints of citrus peel (just enough to remind me that I never did get around to smelling Eau de Citron Noir), of white flowers (although no flower in particular came to my mind, including, sadly, that magnolia), bits of spice, bits of green, perhaps even those bits of bark and dirt. It starts off vague, though, and then goes even softer. Midway through, it smells like petals in water. It's pleasant enough, but rather murky, and for petals in water, I much prefer the equally soft but somehow more compelling Le Jardin de Monsieur Li, because by this point, Lagune is starting to take on a woody amber that will immediately remind many perfumistas of generic man cologne, modern era. This automatic association, I think, is why some have found Lagune more masculine than unisex. Eventually the base drowns out the garden altogether, leaving only the water and the sillage of a man wearing the latest designer cologne from his local mall.

(That same woody amber, though, does give Lagune far more staying power than Monsieur Li can manage.)

My verdict: If you smelled it, do comment and tell me what you thought. For me, it's a big no. It was not a huge disappointment to find that I dislike it, given that there is only one fragrance in this series that I wholeheartedly adore (Un Jardin Sur Le Nil), plus one that I have some degree of warm fuzzies for (Le Jardin de Monsieur Li) and one that I like just fine but did not feel the need to buy (Un Jardin en Méditerranée). But it is one more piece of evidence that I will not be needing to save quite so many pennies for Hermès going forward.

Detractors of Nagel's predecessor, perfumer Jean-Claude Ellena, complained that his fragrances smelled like dishwater, or sometimes pond water or the like. Fans, including me, called them "watercolors" or "transparent" or "minimalist", but even a perfumista like myself, who gave the vast majority of my perfume dollars to Hermès, understood the dishwater reference. In that sense, perhaps we have more continuity than we thought, because I saw at least one pond water dig at Lagune. My bigger complaint is that other than her lovely set for the Hermessences, I've found her work (what I've tried, anyway) at Hermès so far rather humdrum.

Victoria at Bois de Jasmin liked Lagune more than I did, and so did Persolaise. 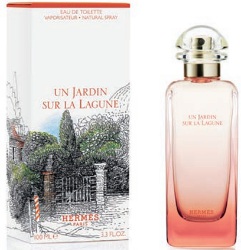 1. From at Hamish Bowles Uncovers a Secret Garden in Venice at Vogue. You can find plenty of other media coverage of her visits to Giardino Eden — only Chanel bests Hermès in inspiring breathless media coverage of its perfumers exploits.