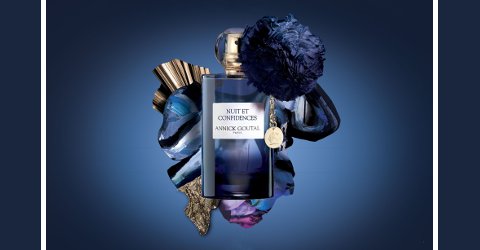 tl;dr a decent middle of the road vanilla.

If you wanted a good illustration of the muddy distinction between niche and mainstream perfumery, you could hardly find a better example than Annick Goutal. The house mostly made its name with classic colognes like Eau d'Hadrien and Eau du Sud, and a handful of pretty feminine florals. When I reviewed Eau de Camille and Eau de Charlotte back in 2007, I noted that...

The Annick Goutal line occupies a rather in-between place among perfume fans — the company probably qualifies as niche based on their size and their limited distribution; still, they are available in a number of mainstream stores (three department stores in my local mall carry them),1 and the line doesn't feel niche. The feminine perfumes are emphatically pretty, romantic even; they don't, like so many niche perfumes, challenge traditional notions of what a woman ought to smell like.

What I perhaps didn't emphasize enough was how few mainstream brands were making nicely done yet emphatically pretty fragrances at the time — Annick Goutal was not really experimenting with the boundaries of perfume in the same way as Serge Lutens or Comme des Garçons, but you weren't likely to smell Eau de Camille and mistake it for a Calvin Klein or Michael Kors fragrance. And the line always had its little oddities, perhaps more in the masculine line than the feminine: from Sables (1985) to Eau du Fier (2000) to Duel (2003).

The house went through what I now think of as a quasi-experimental period under Camille Goutal, dating from 2004/2005 (Vanille Exquise and Mandragore) through 2012 (Nuit Étoilée). Since then, the brand's strategy has appeared to me to be twofold. They've targeted a younger, more mainstream audience with light, cheerful, not-really-perfumista-bait fragrances like Vent de Folie, L'Ile au Thé and Rose Pompon, and they've gone after the always-tempting luxury market with the Les Absolues fragrances Vanille Charnelle, Ambre Sauvage, 1001 Ouds and Rose Oud.

Last year, with Tenue de Soirée, the break with the past seemed complete, and in case you didn't get the message from the juice, they even did away with the brand's classic romantic packaging in favor of the more of-the-moment detachable pompoms and charms. You can pretty much take what I said about Tenue de Soirée...

The 'quirky' is all in the pompom, but Tenue de Soirée is well done. It's youthful without being obnoxious or silly, and it's reasonably sophisticated, and quite wearable. If you like the idea of a gourmand fruitchouli sort of thing but find most of them too loud to wear, it is certainly worth trying.

...and apply it to the new Nuit et Confidences, which is from the same perfumer, Mathieu Nardin, and which does for the vanilla category exactly what Tenue de Soirée did for a gourmand fruitchouli. It's meant to evoke 'champagne bubbles and sequin dresses', and while I'd probably put it in a cashmere sweater instead, it's close enough. The opening is just sparkling and bright enough to justify the champagne reference, then it's a middleweight amber-y vanilla with fruity undertones and a light floral trail. The dry down is slightly resinous, slightly spicy, slightly woody, and is just (barely) boozy enough to make me think of a raisin-vanilla liqueur, if such a thing existed (and for all I know, it does). It's not too dry, not too sweet, and it won't remind you of cake or pudding. 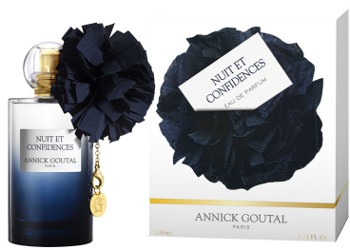 Verdict: I really like Nuit et Confidences — it's a well executed, reasonably sophisticated vanilla, not so light as Eau d'Italie Morn to Dusk or Diptyque Eau Duelle,2 not so heavy as L'Artisan Vanille Absolument or Guerlain Spiritueuse Double Vanille. I found it enjoyable to wear in our (finally!) early fall weather. That said, there's really nothing distinctive about it, and the far dry down is not all that exciting — it's very middle of the (already well-traveled) road, and I found it less interesting than the brand's own Vanille Exquise (sadly, I don't really remember Vanille Charnelle; do comment if you can describe it). I like it, but I'm not yearning to own it. Still, if you love the packaging or if you have not yet found your perfect vanilla, or if you've been hankering after the Guerlain but want something (much) cheaper, it's well worth sampling.2

As for Annick Goutal, what can I say? All my favorite niche brands are going mainstream, and all of the mainstream brands are trying to go niche.

1. Their distribution has changed significantly since I wrote that. Only one store local to me, Neiman Marcus, still carries the brand. US customers can now buy directly from a dedicated US Annick Goutal webstore, though, complete with free shipping.

2. Although I tried Eau Duelle in Eau de Toilette, not Eau de Parfum. Perhaps the Eau de Parfum is not so light.