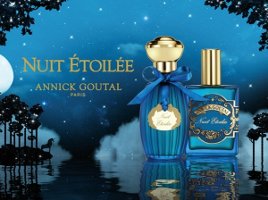 How much does a perfume's back story matter to you? It has long been an axiom in the fragrance industry that the back story is key to commercial success. Along with the other design elements — the packaging, the advertising, etc — it ought to help attract the appropriate consumer audience, and to allow the customer to make an emotional connection with the fragrance and the brand. When it works, it works, when it doesn't...well, that's essentially why we do the Prix Eau Faux, right? And why young people everywhere rolled their eyes at Calvin Klein In2U (to name just one egregious misfire) before they even smelled it.

I was thinking of all this when I first smelled the latest from Annick Goutal, the unisex fragrance Nuit Étoilée. The name makes reference to Van Gogh's masterpiece, and the brand's press materials mention a "dream world" and a solitary communion with nature:

Oh to walk for hours close to nature at nightfall. To listen to the wild grass crumple and fir cones crack under one's feet. Collecting branches of evergreen, snapping them smelling the resinous odor on our fingertips. Then to lie back and enjoy the moonlight, as though alone in the world. 1

I don't know exactly what such a fragrance should smell like, but the woody aromatic developed by perfumer Isabelle Doyen is not at all what I expected. It's a sprightly fragrance, crisp and minty and bright in the opening, with shades of Guerlain's Herba Fresca (the notes for Nuit include sweet orange, Siberian pine, balsam fir, tonka bean, citron and peppermint). Like Herba Fresca, it seems like just the thing to wear as a tonic on a hot summer day.

Over the course of its development, Nuit Étoilée does get richer and deeper, and the pine and other wood notes come to the forefront. Still, it never gets really rich or deep, and even when it warms and sweetens in the far dry down, it retains a sort of brisk edge from the conifers and the lingering mint. At no point does it call to mind the painting, or a solitary excursion in the moonlight, or even the name or the (exquisite) blue of the packaging. The "fir cones" and "branches of evergreen", yes, that's all there, but the rest of it (what Saks refers to as the "wild nature, majestic immensity, in the coolness of a starry night") is lost on me.

So, initially I was disappointed, in the same way that I'm disappointed when a fragrance has tuberose — or vetiver, or whatever — in the name but the juice fails to deliver on the promise. But wearing it over the course of a week or so, I realized that it didn't matter. I like Nuit Étoilée, even if that isn't what I would choose to call it, and even if I don't find it even slightly dreamy.

Like Mandragore,2 and to a lesser extent, Ninféo Mio,3 it perfectly hits that sweet spot in the middle of the spectrum between inoffensive and esoteric. It's the sort of thing you can reach for without thinking, knowing that it isn't likely to cause passersby to wrinkle their noses and that it will "fit" just fine no matter what you're wearing or where you're going or how the weather turns out. It won't wear you out with emotional demands by the end of the day — we all have a few of those perfumes, right? At the same time, it won't bore you to tears, it won't remind you of shampoo or laundry detergent, and you won't smell like everyone else on the planet.

Not everyone loves it though. Victoria at Bois de Jasmin was disappointed, and Octavian at 1000 Fragrances called it a disaster. 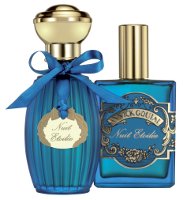 Annick Goutal Nuit Étoilée is available in 50 and 100 ml Eau de Toilette, in either the (feminine) ribbed bottle or the (masculine) square bottle. For buying information, see the listing for Annick Goutal under Perfume Houses.

1. Via First in Fragrance.

2. And Mandragore is another one that grew on me slowly. I was mildly positive when I reviewed it but hardly in love. Eventually, I came to like it well enough to buy it, and I find that I reach for it more often than I would have expected.

3. I say "to a lesser extent" only because many people have reported that Ninféo Mio doesn't work well on their skin.