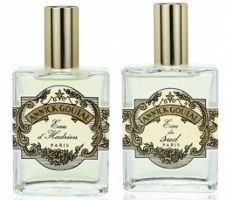 Summer is winding down, and I am giving all my favorite citrus fragrances a last hurrah before putting them away until deep winter, when they will move to the front of my cabinet again so that I can pretend it isn't really freezing cold outside. Annick Goutal Eau du Sud is one of my favorites (see my Top 10 of Summer list). It was launched in 1996, and has notes of bergamot, mandarin orange, grapefruit, lemon verbena, peppermint, basil, persian lime, and woods.

Eau du Sud starts with strong citrus, heavy on the bergamot and grapefruit. There are light herbal undertones; the mint and basil are noticeable but subdued. As it dries down, it takes on a slight but distinct smoky note — tobacco leaf, maybe? — and farther on, there is a tinge of sweat hovering underneath the verbena and woods. The smoke and sweat are light enough that I find them distinctive rather than repulsive, but many find Sud too harsh, and although it is unisex, it leans more towards masculine than the other Annick Goutal unisex fragrances.

If it doesn't suit you, you might try Eau d'Hadrien, which I would guess outsells Sud by a mile. Hadrien was released in 1981 and has notes of lemon, grapefruit, citron and cypress. It is lighter, simpler, smoother and more cheerful. I love the mixture of citrus and cypress in the top notes, but most of the citrus disappears in short order, and the dry down doesn't hold my interest. If I want lots of lemon, I'd rather wear yesterday's Mediterraneo.

Annick Goutal fragrances are available at major department stores and many online discounters.

A side note: if you have any recommendations for other fragrances with lots of cypress, please comment!

Update: Eau d'Hadrien is widely reported to have been significantly reformulated in 2009. I have not tried the new version, and I have not heard anything about Sud but it seems likely to have been redone as well.