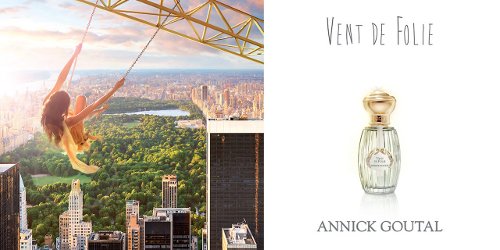 Initially, a sweet pea, a flower in the city.

Then, Camille Goutal and Isabelle Doyen imagine New York, its avenues, its glass towers reaching the sky… A young lady inflamed by the thrill of the city… Like an urban flower, she strolls around, following her instinct. A Vent de Folie, a sillage of craziness follows her…1

If the general PR speak, the New York City references,2 or the recruitment of French street artist Nasty to decorate the press launch and the limited edition bottles (see below) led you to expect a young, edgy juice for Annick Goutal's new Vent de Folie, you were at least half right.

Vent de Folie is, indeed, youthful. It's a fresh floral with a lively berry +  citrus opening, nondescript (and light in any case) floral notes and plenty of pale, slightly bitter greenery. The early stages have a textured finish or "effect", somewhere between metal and stone; the later stages have a light dusting of powder. The dry down is clean but not laundry detergent-ish. It is transparent from the beginning straight through to the end; in synesthesia terms, I picture it in washed-out pastels and shades of cream, very like the sunlit upper left hand corner of the advert shown above.

Verdict: Vent de Folie is entirely modern; it might be what Annick Goutal would have created for her young daughters in 2014 instead of Eau de Camille and Eau de Charlotte (both early 1980s). As a cranky old-school perfumista, of course I think those two fragrances have far more charm than Vent de Folie (and for that matter, so does Petite Cherie, and if you want some little bit of folie served up with the girlish charm, I'd think you'd be better served by the brand's Folavril).3 Still, Vent de Folie is just fine if you're after something more up-to-date and office-appropriate. It's well done and wearable, and perfectly pleasant — wearing it several days in a row was not a chore, and while it's youthful, it's not so overtly young (no cupcakes!) that anyone over the age of 30 would feel silly wearing it. The lasting power is far better than I'd have expected given the sheerness (two good sprays make it through most of the day). 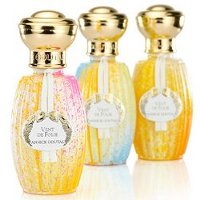 Annick Goutal Vent de Folie was developed by perfumer Isabelle Doyen. The notes include blood orange, geranium rosat, blackcurrant, raspberry, hedione, white musk and cedar.It is available in 50 (€74) and 100 (€98) ml Eau de Toilette. The 100 ml bottle is also available in a limited edition "tagged" by Nasty (shown just above, €98); 150 were made.

2. References to New York as a fragrance inspiration nearly always turn out to mean the opposite of bold and uncompromising, perfume-wise: witness DKNY MYNY, Elizabeth Arden Untold, Calvin Klein Downtown, and the whole of the Carolina Herrera 212 line.

3. I am pretty sure that both Camille and Folavril are discontinued but I do not know if they are still easily found. Do comment if you know!