(Relatively) quick reviews of Morn to Dusk from Eau d'Italie and the Giverny in Bloom collection from Dawn Spencer Hurwitz. 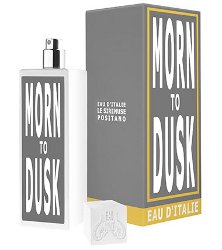 The oddly-named Morn to Dusk is the latest from Italian niche line Eau d’Italie; it promises a "sensual feeling that wraps like a veil of gold, from morning till the sun sets" and "the Italian way to Vanilla: simply irresistible". That translates into a sheer, summer-weight vanilla musk, sugared but too light to be foody in the usual sense, with a pale floral heart. Sheer vanilla musks are not so very hard to come by, and often for far less money than they charge for this one; I had a hard time getting excited about it even though it's well done (possibly more than most) and easy to wear. If you are still searching for a light vanilla that doesn't smell like it's geared towards pre-teens, Morn to Dusk might suit. While a man could certainly wear it, it probably skews to the feminine side of unisex.

If you want a sophisticated sheer vanilla that's a bit less "plain" than Morn to Dusk, you might try Diptyque's Eau Duelle or Jo Malone Vanilla & Anise. Both cost less, plus they can be found in smaller sizes. Please do comment if you can think of more suggestions!

Eau d'Italie Morn to Dusk was developed by perfumer Annick Menardo, and features bergamot, lily of the valley, Bourbon vanilla, sugar orchid and musk. It is available in 100 ml Eau de Parfum, $140. For buying information, see the listing for Eau d’Italie under Perfume Houses. 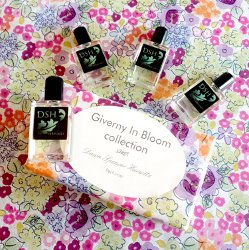 Fans of pretty florals would do well to explore some of the recent offerings from indie line Dawn Spencer Hurwitz. Jessica already reviewed the dewy carnation Fleuriste, and today I'm looking at the Giverny In Bloom quartet. The four were used to create a 'scent experience' at the Denver Art Museum exhibit In Bloom: Painting Flowers in the Age of Impressionism:

DSH has created Monet’s garden at Giverny in 3 accords to create the full panoramic effect: Le Jardin Vert (the green foliage, trees, and moist earth), La Danse des Bleus et des Violettes (the gauzy dance of violets, irises, and lilacs), and l’Opera des Rouges et des Roses (the dramatic opera of old roses, peonies, and carnations). The scent experience all came together to a final piece with each accord woven together, which is the “Giverny In Bloom” scent: the aroma created in the scent experience space.

Since I adore green, I went right for the Le Jardin Vert, and yes, if I was going to buy only one of the four, this would be the one. It's a lively bright green, bitter but not too bitter, encompassing the scent of crushed fresh leaves and stems, and still-green pine needles. It has a damp earth backdrop with hints of tree bark and a mild floral sweetness in which you can just make out the linden (I think it also has rose). It's ever-so-vaguely reminiscent of CB I Hate Perfume Black March, but without that scent's melancholy edge: it's happier and prettier, maybe closer to Enchanted April than Black March.

La Danse des Bleus et des Violettes and l’Opera des Rouges et des Roses are floral blends, each charming in its own way, but worn singly, they did not hold my attention as much as the Giverny in Bloom fragrance, in which you can indeed discern all the elements of the other three "accords". If I was going to recommend just one fragrance from the four, it would be Giverny in Bloom: it's an elegant, wearable, middle-weight modern floral that works well as "an impressionist perfume depicting Monet’s flower garden at Giverny".

Better yet, if your budget permits, would be to buy a set and experiment with layering, since they all play so nicely with each other. You can start with Giverny in Bloom and amplify the parts you like best using the other 3, or you can make your own combination. I was taken with La Danse des Bleus et des Violettes and a touch of Le Jardin Vert, but my absolute favorite was one spray of Giverny in Bloom layered with one or two sprays of Le Jardin Vert. (Fleuriste, which is not in this set, was also interesting with a spray of Le Jardin Vert: it became a  carnation blooming in the garden instead of one already chilling in the florist's fridge.)

Dawn Spencer Hurwitz Giverny In Bloom, La Danse des Bleus et des Violettes, l’Opera des Rouges et des Roses and Le Jardin Vert are available in a variety of sizes and formats, individually or in sets. There is a discovery set with four 3 ml sprays ($48) and a coffret of mini flask bottles (shown above, sorry but I don't know the size of the bottles; $70). A sample set is $24.