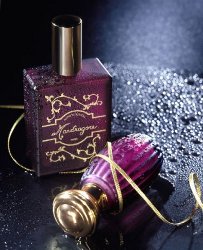 Mandragore is the latest fragrance release from the Annick Goutal line. It was developed by her daughter Camille in collaboration with Isabelle Doyen, the house nose.

Mandragore is, as far as I know, the first fragrance to feature the scent of mandrake, a Eurasian plant with purple flowers and a forked root, long thought to have magical powers. The other notes include bergamot, black pepper, ginger, spearmint, star anise, boxwood, and sage leaf.

Mandragore starts out with dense bergamot and spice notes. The pepper, anise, and ginger are all distinct. After a few minutes, the mandrake (or what I assume to be the mandrake, having never smelled one before) arrives, along with a little tinge of mint. It smells green, and sort of vegetal, and there are definite herbal-woody undertones that are probably from the boxwood.

The men’s bottle (the square one shown above) is one of the nicest I’ve seen lately, so I really wanted to love Mandragore. And I do rather like it in the early stages. It is a refreshing, summery unisex fragrance, and has a nice kick from the spices. Unfortunately it faded very quickly on me, and what was left after 45 minutes was less interesting — just a light, vaguely green smell with a hint of menthol.

For buying information, see the listing for Annick Goutal under Perfume Houses.

Another update: an interesting snippet from an interview with Camille Goutal in Sunday People, in which she talks about the inspiration for Mandragore:

I have always been a fan of folklore and I adore Harry Potter. It reminded me of my childhood when I read it to my daughters. I had always been a little girl to my mother, Annick, even when I was old enough to live independently. After she was gone, the little girl in me somewhat submerged. With Mandragore, I hope to bring out the little child in all adults, to revisit fairy tales and the folklore that we were once so familiar with.

Update #3, 8/18/2006: I am finally getting around to trying the Eau de Parfum version of Mandragore which was released in the fall of last year. It is absolutely perfect. It is still not an all day perfume, mind you, but it is hard to see how you could make it last all day without changing the composition more drastically than has been done here; this version has reasonable lasting power while retaining the crispness and verve of the Eau de Toilette. The woody-herbal undertones are somewhat more pronounced, and the boxwood more easily identifiable, but otherwise it smells largely the same. It stands up beautifully to hot, humid weather. All that is left is to wish that it came in the lovely men's bottle with the gold etching, but unfortunately it does not.

The Eau de Parfum is available online at escentual in the UK at £52.00 for the "regular" bottle, or at nordstrom in the US in the more expensive ($160) butterfly bottle. It can also be purchased directly from Annick Goutal in a limited edition hand painted bottle.

If anyone knows where the "regular" bottle can be found in the US, please comment!