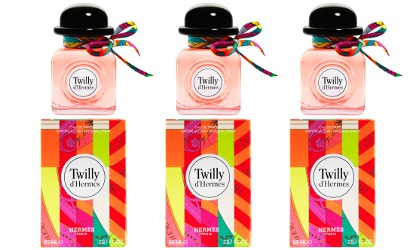 The background: Twilly d'Hermès is the latest fragrance launch from Hermès. It's aimed at young women and was inspired by the freedom and creativity with which they "transform" Hermès scarves, and "appropriate Hermès’ codes to do other things".1 A twilly, in case you don't know (or care) from scarves, is the brand's long thin silk scarf (see example here), and indeed people wear them all sorts of ways: as neck scarves, as headbands, as belts, as purse accessories, etc. At the moment, a 32" x 2" Twilly runs $160 in the US.

The juice: Hermès house perfumer Christine Nagel decided she would likewise "transform" or "twist" her raw materials, which are ginger (reportedly an "enormous quantity"),2 tuberose and sandalwood.

The advertising: Compare the millennial pink assembly line for Twilly d'Hermès with the more conventional / romantic spot for Jour d'Hermès — it's not hard to see which is the fragrance going after the youngs.

What it smells like: A soft clean floriental. There is a spicy kick from the ginger early on, mingling with some mild fruity notes — mango peach jam? — which gives it some verve, but it is not a fruit bomb by any means, nor is it overly sweet, and once the ginger fades, it's not an edgy or assertive fragrance. The tuberose, to my nose, has been twisted into something that smells like molecular fractions of orange blossom and something else flowery — it could be tuberose, who knows.3 There aren't enough of the sharp and/or dirty bits remaining to tell any tales. The base is a pale woody musk, and likewise, I suppose it could be sandalwood. It's warm-ish, but nowhere near so warm that you'd set it aside for cold weather.

My verdict: Props go to Hermès for not giving us another fruitchouli clone. I would think any woman, of any age, could wear Twilly d'Hermès without pause. I liked Nagel's first pillar outing for Hermès, Galop d'Hermès, but it was a touch too restrained for my taste, and while I liked Galop better than Twilly, my reaction here is pretty much the same. Twilly smells good, but it does not hold my interest after the first 15 minutes or so.4 Now, Nagel's predecessor, perfumer Jean-Claude Ellena, also tended towards restraint, and I'd be hard pressed to put in words just why it is that his fragrances rarely bored me. Mind, I did not like everything he produced, but I am pretty sure there were never four Ellena releases in a row that I did not want to own. I'm at four now with Nagel: I did not feel the need to buy Eau de Rhubarbe Écarlate, Galop, Eau des Merveilles Bleue or Twilly, except...

Oops: I bought a 15 ml bottle unsniffed. Oh well. Hopefully it will turn out to be swappable. Never buy unsniffed, folks! 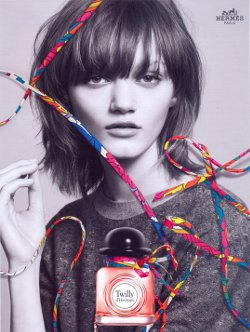 The details: Twilly d'Hermès is available in 15, 30, 50 and 85 ml Eau de Parfum. Twice, the larger bottles have appeared on the Nordstrom website, and twice they have disappeared again. The official launch is in a few days, and so when they reappear I'll add the US prices. (If the cached copy at Nordstrom is correct, the 50 ml is $100 and the 85 ml is $130, in which case Twilly is much cheaper than Galop d'Hermès, and more in line with what they charge for the Merveilles series. Update: yes, those are the correct prices, 50 ml for $100 and 85 ml for $130. Another update: the 30 ml is $79 at Sephora.)

3. Twilly smells even less like tuberose than Stella McCartney Pop, another youth-oriented scent that was advertised as tuberose and sandalwood. Pop is bright and pink and fruity, though, while Twilly seems to be going for a more sophisticated audience.

4. Indeed, I wore it yesterday and today and I'm already pretty much done with it. I really ought to have worn it another few times before reviewing it, but life is short and I do not think I am going to change my mind about Twilly. If I do, I promise to post an update.