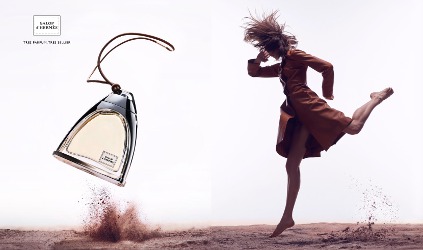 It would not really be accurate to say I was worried about what perfumer Christine Nagel would do when she took over as house perfumer at Hermès. Plenty of other things keep me up at night, but not that. But certainly I wondered if Hermès would continue to take the bulk of my perfume-spending dollars, or if I'd have to find a new BFF brand to empty my wallet every so often. What I think of as the transitional fragrance duo — Eau de Rhubarbe Écarlate and Eau de Néroli Doré — that marked the passing of the baton from perfumer Jean-Claude Ellena,1 added to the uncertainty, given that I lost interest in Nagel's Rhubarbe Écarlate within 30 minutes but fairly quickly bought a small bottle of Ellena's Néroli Doré (and I'm still sorely tempted by the matching body products).

But perhaps I was too quick to judge. Nagel's first pillar outing, Galop d'Hermès, is darned good, and while it makes its own way, it also eases comfortably into the brand's existing line up. According to Ms. Nagel, she wanted “...a dance between rose and leather,2 and while Hermès already has two contemporary leather fragrances (Kelly Caleche and Cuir d'Ange)3, presumably they can easily afford another given their long history of selling the material in all its possible forms. Ms. Nagel, like Mr. Ellena before her, started with the smell of the Hermès leathers:

The craftsmen always speak about this [Doblis] leather, that it has one side that is flesh and the other side that is rose. When I found this leather, I had this association that I want to find a counterpart for this leather and that would be the rose. What I want is that there will be a balance between the two, which is hard because usually leather overpowers anything else. So it was a lot of technical work to achieve the balance where they are both equal—the rose and the leather.4

All of which might serve to warn you up front that Galop d'Hermès is no more of a leather bomb than Kelly Caleche or Cuir d'Ange. It's an oriental, but on the sheer side, with a lively, slightly quirky fruit opening (quince, berries and citrus) followed by a soft, saffron-y leather intertwined with rose. The leather is more leather-y than that of Cuir d'Ange, but only by a shade: we are still in Birkin-bag territory, not the stable. The rose is likewise more mild than than deep, with fruity and spicy nuances. As advertised, neither material dominates, indeed, a quick, casual sniff might not immediately call up rose or leather. Galop as a whole is warm (and the perfect weight for autumn) but not heavy; the feel is of restrained elegance.

To my nose, it is completely unisex (I found it far less feminine than Kelly Caleche), and the lasting power is reasonable.

Verdict: The stirrup bottle seems to be love it or hate it, but I love it, and as I said above, the juice is darned good. That said, I am not in love with Galop — I would not at all mind having a bottle, but I do not feel any burning need to own it. Good thing, because it's also darned expensive. The 50 ml is $210; for comparison purposes, Kelly Caleche is $119 and Jour d'Hermès Absolu is $118. What justifies the much higher price? It's apparently not the bottle, since the refill is also $100 more than the same size refill of the Jour d'Hermès Absolu. Perhaps it's the Parfum concentration? If so, it's not something I'd pay extra for as a consumer — regardless of what it cost to make, it does not wear differently from the brand's lighter concentrations, nor does it, like some Extraits, smell like it was made with bounteous quantities of rare natural materials.

So, perhaps what I should have been considering lately was not how Christine Nagel's work would change Hermès as a perfume house, but how the brand would respond to the larger pressures on the (hugely overcrowded) perfume market. The money at the moment seems to be flowing at two ends of the spectrum: we're seeing more and more rollerballs and other small sizes from the mainstream brands, but at the same time, an avalanche of products priced to appeal to the upscale luxury market. It may well turn out that Christine Nagel will make plenty of perfumes I am dying to own, but I won't be able to afford them. (As of this writing, Galop is not available in the 15 ml coffrets, and while it might be released in that size eventually, I suspect we'll have to wait for it to be produced in a lighter concentration.)

2. Via Hermès Rides High with the Launch of Its New Fragrance, Galop at Forbes.

3. Or three if you count Bel Ami Vetiver as contemporary.

4. Via Hermès Introduces the Most Hermès-y Fragrance Ever at Elle.